For many years now, the Republican Party has relied on the votes of white men to win the presidency. But that’s gotten harder and harder. As Lindsey Graham famously put it four years ago, “We’re not 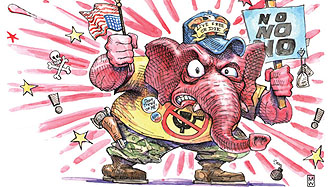 generating enough angry white guys to stay in business for the long term.”

Graham was right: there’s only just so much you can do with this demographic. In 1980 Ronald Reagan pulled white evangelicals and social conservatives away from the Democratic Party. That got the ball rolling. George Bush seized on Willie Horton in 1988. That helped things along. In the 90s, Newt Gingrich teamed up with Rush Limbaugh, the champion of the angry white guy. That helped some more. A decade later Karl Rove went off on a dogged search for the final scraps of the evangelical vote. That helped—but only by a percentage point or two. The pickings were getting slim. Finally, with nothing more available to them, a few years ago the Republican Party embarked on a strategy to suppress the non-white vote via voter ID laws. That was a desperate ploy, and it eked out only a slight advantage. For all practical purposes, by 2012 they seemed to be out of ideas. What more could they do?

At the time, I figured they were at the end of their rope. There are only so many angry white guys out there, and only so many that you can get out to vote. The GOP had squeezed the onion dry, and there wasn’t anything left to do.

But I was wrong. There was one more last-gasp possibility that I hadn’t seriously considered: nominate a guy willing to explicitly base his campaign on racism and xenophobia. No more dog whistles. No subtlety. No “self-deportation” or “Southern heritage.” No winking and nudging as talk radio and Fox News did the dirty work. This was, literally, the only option left to them.

And so we got Donald Trump. It makes sense, but most of us simply didn’t think Republicans would be willing to go quite this far. We were wrong. The embarrassing part of this for me is that I wrote about this very thing four years ago in Democracy Journal:

Here are six trends that I think are likely to continue for the next dozen years and beyond….Trend #5: The Republican Party will continue to become ever more dependent on the white vote, while the Democratic Party will depend ever more on minorities.

….So what does this all mean? With the usual caveats taken—world events can change things, anything can happen, etc.—here are some guesses. One: Certain aspects of the culture wars will heat up. In particular, thanks to the increasingly polarized demographics of the two main political parties, fights over immigration and race may well be even more acrimonious than they are today.

I guess I should have listened to myself.