There’s no reason to post this today in particular, but 2016 is the 70th anniversary of the Roosevelt dime. Huzzah! It holds the US record for longevity in design: aside from dates and mint marks, it’s remained unchanged for its entire 70 years.1

There’s an interesting story about that design. Obviously Franklin Roosevelt is on the obverse and the symbol for the March of Dimes, which was closely associated with Roosevelt, is on the reverse. But there’s more. At the time of Roosevelt’s death in 1945, the Soviet Union was still an ally against the Axis powers in World War II, 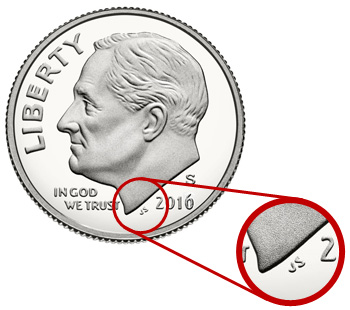 and there was a strong pro-communist clique within the US Mint’s Bureau of Engraving that wanted to memorialize our alliance with “Uncle Joe” Stalin. They settled for quietly engraving his initials right below Roosevelt’s bust. Unfortunately for the clique, by the time the dime was released to the public in 1946 the Soviet Union was no longer an ally and the red scare was well underway. When Stalin’s initials were discovered, conservatives went ballistic and the Mint had to quickly come up with some kind of plausible cover story. Luckily, the artist who drew Roosevelt’s bust was named John Sinnock, so that was the story they settled on. The initials had nothing to do with Stalin. It was just an unfortunate coincidence that Sinnock shared Stalin’s initials.

But it really is Stalin’s initials on the dime, and they’re there to this day. You can see them pretty easily with a magnifying glass. In fact—

What’s that? You don’t believe this? Well, of course not. That’s because everyone reading this blog has at least a room-temperature IQ. Modern US coins all feature their designers’ initials, which is why you can see VDB on the Lincoln Cent, GR on the Kennedy half dollar, and so forth. But in the right-wing fever swamps of the 1940s, a lot of people really did believe that these were Stalin’s initials.

So you see? Americans have always been a little bit crazy. Or even a lot crazy sometimes. We should all just feel lucky that Donald Trump wasn’t president at the time. He would have insisted on the dime featuring his initials, not some loser artist’s. And initials probably wouldn’t have been enough. He would most likely have directed the Mint to engrave TRUMP on every coin issued during his tenure. No conspiracy theory would have been necessary to know where that came from.

1The Washington quarter lasted 67 years, 1932 to 1999, before it was changed for the state quarter series. The record holder for a single side of a coin is the Lincoln cent. Its obverse hasn’t changed in the 107 years since its introduction in 1909.