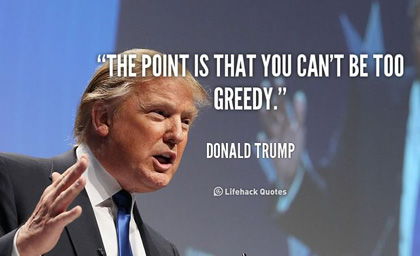 Those newly unsealed documents in the Trump University case don’t paint a pretty picture of either the “university” or Donald Trump himself:

Jason Nicholas, another witness for the plaintiffs who worked as a sales associate for five months in 2007, also said he was appalled by what went on at the university. “They were unqualified people posing as Donald Trump’s ‘right-hand men,'” he wrote. “They were teaching methods that were unethical, and they had had little to no experience flipping properties or doing real estate deals. It was a facade, a total lie.”

In his sworn declaration, Mr. Schnackenberg [said] he quit his job after refusing to pitch the seminars to a couple that he thought couldn’t afford them. “They had no money to pay for the program but would have had to pay for the program using disability and taking out a loan based upon equity in his apartment.” He said another sales manager “talked them into buying a $35,000 seminar.”

Donald Trump was personally involved in devising the marketing strategy for Trump University, even vetting potential ads, according to newly disclosed sworn testimony from the company’s top executive taken as part of an ongoing lawsuit…“Mr. Trump understandably is protective of his brand and very protective of his image and how he’s portrayed,” Michael Sexton, Trump University’s president, said in the 2012 deposition. “And he wanted to see how his brand and image were portrayed in Trump University marketing materials. And he had very good and substantive input as well.”

Corrine Sommer, an event manager, recounted how colleagues encouraged students to open up as many credit cards as possible to pay for classes that many of them could not afford. “It’s O.K., just max out your credit card,” Ms. Sommer recalled their saying.

…Ms. Sommer recalled that a member of the Trump University sales team, who had previously sold jewelry, was promoted to become an instructor. He had “no real estate experience,” she said. She added that many of the instructors had the quality that the school seemed to value most: “They were skilled at high-pressure sales,” she said.

In other words, Trump was eager to squeeze every cent he could out of his students but played no role in choosing instructors or creating the curriculum. He cared about his image, but that was it. What a guy.