Over at The Corner, conservatives are using the opportunity of dozens dead in France to—what else? Blame it all on President Obama. Here’s a small sampling:

Mario Loyola: I don’t want my incandescent anger at Obama’s ISIS policy to get in the way of a simple observation: Obama thinks that more people die in bathtubs than in terrorist attacks, and accordingly, it would be disproportionate to make more than a minimal effort to eliminate the ISIS safe havens in Syria, Iraq, Libya and elsewhere. He thinks today’s elevated risk of mass-casualty terrorist attacks in Europe and the U.S. is more acceptable than the risks of really going to war against ISIS, and he thinks that going to war against ISIS won’t stop the terrorist attacks anyway.

Jeremy Carl: One sees how deeply unserious a country America has become. And this is true not just among politicians, but in our entire public culture, which has ultimately permitted as dangerous, divisive, and shallow a man as President Obama to occupy the highest office in the land….We’ve fallen so far that a French socialist dandy is teaching us about resolve in the face of terror, just as previously a bunch of French leftist cartoonists at Charlie Hebdo taught the simpering cowards in our mainstream media a lesson about the true purpose of and, sadly, the ultimate price that must sometimes be paid for, defending free speech and expression.

Jay Nordlinger: What I have to say is not very sophisticated. It would not pass muster at the Council on Foreign Relations. But I think you have to kill these jihadists, and kill them, and kill them, until they simply tire of being killed and leave civilization alone.

A final thought, for now: Al Haig used to say, “Go to the source. You gotta go to the source.”…Iraq, Syria, and Iran are home bases for terrorists worldwide. (And I have confined myself to three.) I know that, for more than ten years, we’ve been tired of the phrase “Either confront them over there or confront them here.” Yeah, yeah, yawn, yawn, warmongering neocons. But some clichés are true, whether we want them to be or not.

Peter Kirsanow: The JV team is whipping the Super Bowl champs because the latter’s coaches are weak, stupid, and deluded….At the same time the president wrings his hands about possible radicalization of American youth he moves heaven and earth to release the most dangerous of radicals from Guantanamo. The commander-in-chief can set red lines toward no purpose and apologize to enablers of terror but he can’t summon the interest or ability to secure a status of forces agreement. No place on the planet is more secure and peaceful than when the president took office.

All of these folks are fundamentally pissed off about our “seriousness” in going after ISIS—although I don’t think ISIS has yet been connected to the Nice attack. But put that aside. Whenever I read stuff like this, I have one question: What do you think we should do? 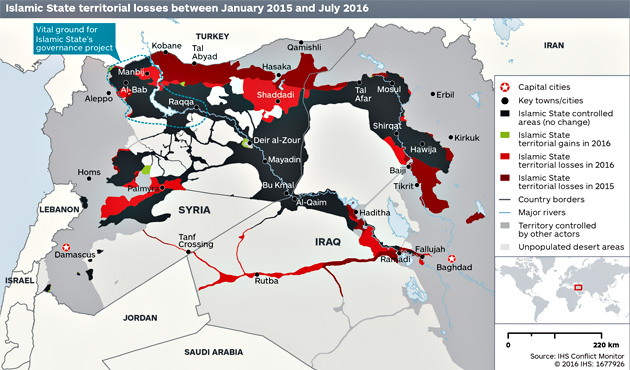 If you really want to destroy ISIS, and do it quickly, there’s only one alternative: ground troops, and plenty of them. This would be a massive counterinsurgency operation, something we’ve proven to be bad at, and at a guess would require at least 100,000 troops. Maybe more. And they’d have to be staged in unfriendly territory: Syria, which obviously doesn’t want us there, and Iraq, which also doesn’t want us there in substantial numbers.

Is that what these folks want? Anything less is, to use their words, unserious. But if they do want a massive ground operation, and simply aren’t willing to say so because they’re afraid the public would rebel, then they’re just as cowardly as the people they’re attacking.

This is the choice. Don’t bamboozle me with no-fly zones and tougher rules of engagement and better border security. That’s small beer. You either support Obama’s current operation, more or less, or else you want a huge and costly ground operation. There’s really no middle ground. So which is it?