MoJo’s ace reporting team tells us what happened when Bernie Sanders addressed his delegates at the Democratic convention. At first, when he talked about the platform and the resignation of Debbie Wasserman Schultz, things went fine:

But when he tried to rally the delegates on behalf of Clinton, his audience became restless. “Immediately, right now, we have got to defeat Donald Trump, and we have got to elect Hillary Clinton and Tim Kaine,” Sanders said. His delegates shouted their protests and booed, forcing Sanders to pause before continuing in his remarks. Sanders called Trump a “bully and a demagogue” who “has made bigotry the core 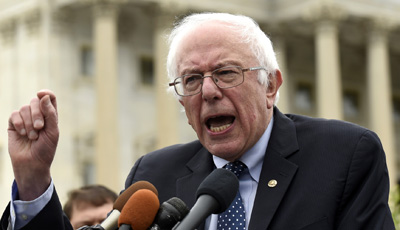 of his campaign.” Still, the boos continued. “She does too!” delegates shouted. Others yelled, “Only you! Only you!”

Sanders declared that Trump poses a danger to the country’s future, but he could not win over the crowd. “She has ruined communities!” one woman shouted. “She has ruined countries!” Sanders pointed out that Trump “does not respect the Constitution of the United States.” Delegates kept on chanting: “Not with her!” and “We want Bernie!”

Our reporters say that Sanders “looked a bit surprised by the intensity of the Clinton opposition.” I can’t imagine why. This is one of the big problems I had with him back during the primary. It’s one thing to fight on policy grounds, as he originally said he would, but when you start promising the moon and explicitly accusing Hillary Clinton of being a corrupt shill for Wall Street—well, there are some bells that can be unrung. He convinced his followers that Hillary was a corporate warmonger more concerned with lining her own pockets than with progressive principles, and they still believe it. And why wouldn’t they? Their hero told them it was true.

Hillary is no saint. But her reputation as dishonest and untrustworthy is about 90 percent invention. Republicans have been throwing mud against the wall forever in an attempt to smear her, and the press has played along eagerly the entire time. When Bernie went down that road, he was taking advantage of decades of Republican lies in the hopes of winning an unwinnable battle. He was also playing directly into Donald Trump’s hands.

I don’t know. Maybe he never realized how seriously his young followers took him. It’s possible. But he really needs to do something about this. Tonight’s speech would be a good starting point.