Jonah Goldberg writes today that the conventional wisdom about the DNC email leak is that Russia engineered it in order to help Donald Trump, its preferred candidate:

But there’s another theory with wide currency out there. It’s most articulate and forceful subscriber is Hugh Hewitt. Because Hillary’s private server was almost certainly hacked by the Russians, we should assume that they know literally everything Hillary has sent or received over it. Most intelligence and cyber security types seem to agree. Hence, Hugh argues, Hillary is “compromised.” They have leverage over her.

So far, I’m pretty much with Hugh. But here’s what I don’t get. If the Russians have so much leverage over Clinton, why don’t they want her to be president? This morning, Hugh dangled a theory that the Russians were yanking her leash by showing they have the goods on her. They saved the server emails 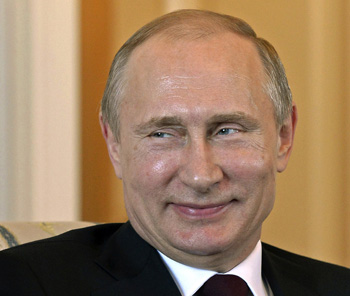 for later (or for blackmail), but released the DNC emails to brush her back, or something.

This is lunacy. For starters, keep in mind that there’s no actual evidence that anyone hacked into Hillary’s private server. Second, even if the Russians did hack her server, they only “have something” on Hillary if she actually did something. Both Hewitt and Goldberg seem to think it’s so obvious that Hillary is up to her armpits in corruption that they don’t even have to make an argument for this. Of course she’s concealing mountains of double dealing on her server. And the Russians are keeping all this secret so they have leverage over President Hillary when the time comes.

This is, of course, nuts. It’s nuts to so blithely assume Hillary’s corruption. It’s nuts to think the Russians would keep their intel secret instead of simply releasing what they have and ruining her chances of winning. It’s nuts to think that Hillary would even run for president if she knew she had some kind of huge bombshell that was likely to blow up on her.

It would be one thing if this came out of the fever swamps. And I know my readers will all tell me that Hewitt and Goldberg are part of the fever swamp. But they’re not. Whatever else you think of him, Goldberg isn’t even all that extreme in his conservatism. Hewitt is, but he’s also a smart guy who’s relatively restrained by radio jock standards. They’re both pretty mainstream conservatives.

But one of them is willing to make up a completely batshit argument, while the other says he’s “with Hugh” and is only willing to concede that he doesn’t think his case “is quite as compelling as he makes it sound.” If these guys are wondering how Donald Trump captured their party, all they have to do is look in the mirror.