The latest weirdness from the Donald Trump campaign is its June fundraising efforts. Trump is apparently having trouble raising money from the usual Republican suspects, but wants to avoid the embarrassment of yet another FEC report showing that he has no money. So he’s turning to small-dollar fundraising via email. This shouldn’t have been a problem. Conservatives mastered this approach to raising money a long time ago, so all Trump had to do was hire one of the many firms who have accumulated gigantic email lists and specialize in wringing donations out of ordinary citizens.

But apparently he didn’t do that. For the past few days, reports have come in of people overseas being spammed with Trump fundraising emails. And not just any foreigners: members of foreign parliaments. This is peculiar, to say the least. First, it’s illegal. Foreigners aren’t allowed to contribute to presidential campaigns. Second, it’s easy to avoid. Just purge your email list of addresses ending in .uk, .dk, etc. Any experienced email shop would already have done this. So where did Trump’s email list come from?

Josh Marshall has been following this for several days, and he has a theory:

So Tim Watts is my new best friend in the Australian federal parliament. MP Tim Watts. Needless to say, we’re pals now because he’s getting bombarded by the Trump campaign asking for money to fight ‘Crooked Hillary’….When I chatted with Tim last night (US Time) he said he’d gotten two more Trump emails in the last 7 hours hours. But when he showed me the emails, something pretty weird was immediately apparent.

They weren’t actually just from Trump. One was from the Trump campaign. The other was from a pro-Trump Super Pac called Crippled America PAC.

Now, normally (i.e., completely separate from anything to do with Trump) it would be entirely unremarkable that someone was getting fundraising emails both from a campaign and also Super PACs supporting the campaign. They’re likely both buying lists from the same vendor or even different vendors of likely Trump voters.

But remember, Tim is a foreign citizen and part of the government in another country. We’ve already speculated about the various ways all these foreign legislators could have ended up on Trump’s list. The more we’ve looked into it, it seems increasingly implausible that he got this list from a list vendor. Not impossible just not likely at all. It now seems more probable that the Trump Organization simply had these emails in some business related database and decided to dump them into the email hopper for the fundraising blitz or just found some site that had a zip file of foreign government officials and used that.

….Given what I’ve said above, the existence of this list almost has to originate in Trump Derpland. A virtual certainty. So how did the same list end up in the hands of a Trump SuperPac? I looked up Crippled America PAC and as of their last filing just a couple weeks ago, they’re total budget was $40. No m or b after that $ sign, forty bucks, the price of a fancy dinner. So obviously CAP was just stood up and actually started operating just now. And now they’re showing up in Tim’s inbox.

Marshall believes that this is a pretty obvious sign of coordination between the Trump campaign and a Trump Super PAC, which is a big non-no. What’s more, they didn’t even bother trying to hide it. There are undoubtedly ways 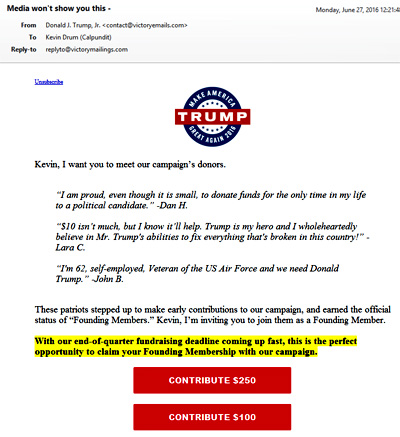 they could have coordinated while still passing legal muster, but either they didn’t have time for that or didn’t know they weren’t allowed to coordinate or just didn’t care.

Wherever the list came from, I guess it’s a pretty lousy one: I’ve gotten several Trump fundraising emails too, and I’m pretty sure there’s nothing in my background that suggests I’d be soft touch for a Trump donation. Conversely, I never received a Ben Carson email while he was busy with his campaign grift. Apparently he at least cared enough to hire a decent vendor.

A sample from Monday is on the right. It comes from contact@victoryemails.com, whatever that is. I got another one from rnc@gopvictory.com, which I suppose originates from the Republican National Committee? All very strange.