I remain agnostic about the 1996 welfare reform act, simply because I haven’t studied it enough. But Ron Haskins, a former Republican congressional staff director, points out one very conspicuous failure:

Haskins said the reform has had important successes — improving day-care programs, helping local authorities collect child-support payments from absent fathers, establishing the value of work in American culture with an unequivocal statement by Congress and the president.

At the same time, Haskins said, the reform has done too little to help the worst off. Clinton’s reform gave states authority to use federal money to help parents train and find work, but many states used the money for other purposes, he said.

“This group of moms at the bottom needs help,” he said. “It’s disappointing to me that the states have not tried harder.”

I assume Haskins is sincere, but this is what happens when you leave social welfare programs up to the states, as Republicans have been hellbent on doing for decades. This usually takes the form of “block grants,” where federal programs are eliminated and money is instead given to states with only moderate strings attached.

Because of they way they’re funded, block grants are a handy way of ensuring that spending on the programs will never increase much: in the case of TANF, funding for the block grants was fixed forever at $16.5 billion. In inflation-adjusted terms, this means that funding has decreased from $21 billion to $16 billion since 1996. Even during the Great Recession, TANF funding only barely rose—for two or three years—to 1996 levels. This was despite the fact that the number of poor during the Great Recession far exceeded the number in 1996.

But that’s not all. Block granting also allows states more freedom to do what they want, and the plain truth is that there are a lot of states that don’t really want to do anything. So they do their best to game the system in every possible way, spending their block grant money on anything except helping the poor. As the CBPP chart on the right shows, only about 26 cents of every 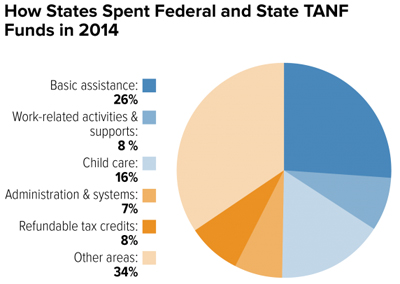 block grant dollar goes to cash assistance for the poor, and only half goes to core welfare programs at all.

This is especially ironic in the case of welfare reform, which was largely the result of experiments by states in the late 80s and early 90s. Some of those experiments had been pretty successful, which allowed the states to argue that they could handle welfare programs better than the sluggish federal bureaucracy. But once welfare reform was passed, the experiments ended. Instead, many states began pushing the envelope as hard as they could to redirect their block grant money away from poor people and into other programs. They argued—and continue to argue—that these programs help the poor more than actual welfare programs do, but in most cases this is obvious sophistry. They’re just plugging budget holes with welfare money and telling the poor to pound sand.

Of course, there are other ways states can show their contempt for the poor even more transparently. Obamacare allowed states to expand Medicaid for virtually no cost. It was a no-brainer. But lots of states didn’t want to help the poor, and when the Supreme Court gave them the opportunity to reject the free federal money, they did. This hurt their hospitals and hurt their economies, but no matter. Their hatred for spending money on the poor is so red hot that they pulled out of the expansion program anyway.

Whatever else you think about welfare reform, there’s one clear lesson we’ve learned: federal programs should remain federal programs. Lots of states actively hate spending money on the poor, and if you give them money they’ll do everything they can to avoid spending it on the people it’s designed to help.