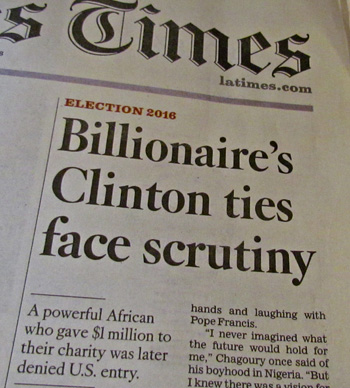 When I picked up my copy of the LA Times this morning, I was greeted by the headline on the right. It’s about someone you may have heard of: Gilbert Chagoury, a billionaire from Nigeria.

Chagoury is a prominent example of the nexus between Hillary Clinton’s State Department and the family’s Clinton Foundation, which has come under renewed scrutiny during her presidential run. The organization, founded as a way for the Clintons to tap their vast network for charitable works, has tackled some of the steepest challenges in the developing world, including rebuilding Haiti and fighting AIDS in Africa. It has also come under fire for its willingness to accept money from foreign governments with interest in swaying U.S. policy during Clinton’s time as secretary of State, and the controversial histories of some donors.

A nexus! So what’s up with Chagoury? Here’s a snapshot:

Chagoury was born in 1946 in Lagos to Lebanese parents….During the rule of Gen. Sani Abacha, who seized power in Nigeria in 1993, Chagoury prospered….tried to influence American policy to be more friendly to the regime….Abacha turned out to be “one of the most notorious kleptocrats in memory,” stealing billions in public funds….After Abacha’s death in 1998, the Nigerian government hired lawyers to track down the money. The trail led to bank accounts all over the world — some under Gilbert Chagoury’s control. Chagoury, who denied knowing the funds were stolen, paid a fine of 1 million Swiss francs, then about $600,000, and gave back $65 million to Nigeria; a Swiss conviction was expunged, a spokesman for Chagoury said.

OK. Chagoury is rich, powerful, connected, and maybe a little shady. Next:

In 1996, he gave $460,000 to a voter registration group steered by Bill Clinton’s allies….attended Clinton’s 60th birthday fundraiser….contributed $1 million to $5 million to the Clinton Foundation….the Chagoury Group’s Eko Atlantic development — nine square kilometers of Lagos coastal land reclaimed by a seawall — was singled out for praise.

….By last summer, U.S. diplomats had selected a 9.9-acre property at Eko Atlantic as the preferred site for a new Lagos consulate, State Department documents obtained by the Los Angeles Times show. Two months ago, James Entwistle, then the U.S. ambassador to Nigeria, wrote to Washington, asking permission to sign a 99-year lease.

The Eko Atlantic stuff is small beer, and happened after Hillary Clinton left the State Department anyway. So what’s her connection to all this? That’s a little hazy:

[Doug] Band, Bill Clinton’s aide, pushed for new access for Chagoury after Hillary Clinton took over at the State Department. In 2009, Band wrote his friends in the department. “We need Gilbert Chagoury to speak to the substance guy re Lebanon. As you know he’s key guy there and to us and is loved in Lebanon. Very imp.” Huma Abedin, a longtime aide and confidante to Clinton and now vice chairwoman of her presidential campaign, suggested [former Ambassador to Lebanon Jeffrey] Feltman….But no meeting ever happened, according to both Feltman and Chagoury’s spokesman. Chagoury wanted only to pass along insights on Lebanese politics, Corallo said, adding that “nothing ever came of it” and that Chagoury never talked to anyone at the State Department.

And…what? This is followed by a description of Chagoury’s run-ins with US security officials, all of which happened after 2009. However, the story is written in such a way that this is unclear unless you read carefully.

So as near as I can tell, Chagoury (a) is tied up in some of the less savory aspects of Lebanese politics, (b) has contributed to the Clinton Foundation, and (c) wanted to discuss Lebanon once with someone at State, but never did. Later on, he had trouble getting a US visa thanks to suspicions of past connections with Hezbollah, which Chagoury denies.

Am I missing something? How did this end up as the lead story in today’s LA Times?