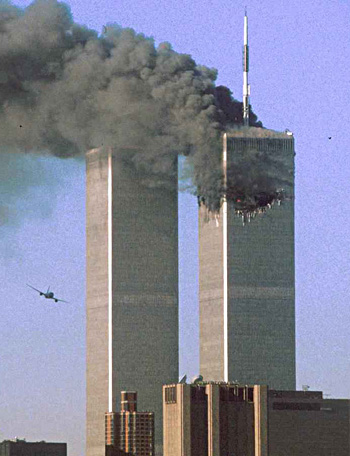 How did you respond to 9/11? Did you mourn? Burn for revenge? Or were you like Donald Trump, musing about how the destruction of the World Trade Center might help your business?

Alan Marcus, who was working that day for WWOR as an on-air analyst, asked the real estate mogul to step into a role that seemed fanciful at the time….Trump didn’t talk about retribution or leap to conclusions about who was responsible. In fact, he avoided identifying potential enemies—any terrorist organization or Muslims in general.

….“40 Wall Street,” he said, referring to his 71-story building blocks away from the now-collapsed twin towers, “actually was the second-tallest building in downtown Manhattan, and it was actually, before the World Trade Center, was the tallest—and then, when they built the World Trade Center, it became known as the second-tallest. And now it’s the tallest.”

Marcus chalked up the remark to “Donald being Donald….He is the brand manager of Trump, and he is going to tout that brand, and he does it reflexively,” he said. “Even on that day.”

Well, we all process grief in our own way. We shouldn’t hold this against him. At least he used his wealth to help out 9/11 charities in the months after the attacks. Right?

In the aftermath of the 2001 terror attack on the World Trade Center, Donald Trump, a billionaire son of New York City, did not make a single charitable donation to any of the not-for-profit groups that provided aid to survivors, rescue workers, or the families of cops and firemen who died trying to save others, Internal Revenue Service records show.

….In a December 2003 report detailing the “unprecedented outpouring of charitable support” following the 9/11 attacks, The Foundation Center noted that nearly 1300 foundations, corporations, and other institutional donors gave a total of $1.1 billion for recovery and relief efforts….But Trump, whose family first became wealthy renting apartments to the working class in Brooklyn and Queens, chose not to take part.

Hmmm. Well, at least he didn’t take money meant to help small businesses recover from 9/11 and use it to refurbish one of his…oh, of course he did:

Donald Trump’s tale about why he took $150,000 in 9/11 money is as tall as the Downtown skyscraper [Trump Tower] he says he used in recovery efforts, according to government records.

Though the billionaire presidential candidate has repeatedly suggested he got that money for helping others out after the attacks, documents obtained by the Daily News show that Trump’s account was just a huge lie.

Records from the Empire State Development Corp., which administered the recovery program, show that Trump’s company asked for those funds for “rent loss,” “cleanup” and “repair” — not to recuperate money lost in helping people.

Trump claims the money was “probably” meant as reimbursement “for the fact that I allowed people, for many months, to stay in the building, use the building and store things in the building.” It wasn’t. As the Daily News says, his application says it was for cleanup and repair, even though he had earlier said that his building wasn’t damaged. “It was not part of the program to give money away for the other ancillary stuff,” says David Catalfamo, who helped run the program. “The way the program worked was to help businesses cover for uninsured losses. Businesses came forward with their losses and we covered part of them.”

And how did Trump qualify as a “small business” in the first place, even though the Trump Organization employs thousands? Well, the particular entity that owned the building had fewer than 500 employees, so voila. Instant payday.

Some mourn. Some burn for revenge. Some help bury the dead. And then there are the ones who just cash in. That’s no surprise. We usually don’t think of them as presidential material, though.