In a Quinnipiac poll from last week, when Stein and Johnson were included, Clinton received just 31 percent support from likely voters 18-34. Johnson came in second with 29 percent, while Trump garnered 26 percent and Stein 15 percent. When Stein and Johnson weren’t offered as options, that age cohort sided with Clinton over Trump by a 55-34 margin.

Oof. She loses 24 percent of the millennial vote to Gary Johnson and Jill Stein. But wait. Jacob Levy says that, on net, Johnson helps Clinton because he’s also taking away votes from Trump. On a net basis, it’s only Stein who’s really hurting her:

Quinnipac is unusual in directly comparing people’s answers in the two-way and four-way match-ups. Of people who chose Clinton in the head-to-head, 85% stay with Clinton in the 4-way, 8% go to Johnson, and 7% go to Stein. But of people who chose Trump in the head-to-head, 90% stayed Trump, 9% went to Johnson, and 1% went to Stein.

….What this suggests to me is: Clinton’s widely-reported overall loss in the switch from two-way to four-way polling match-ups is entirely due to Stein. Although Johnson is polling much higher than Stein and seems like he should therefore be having a bigger effect on the race, that 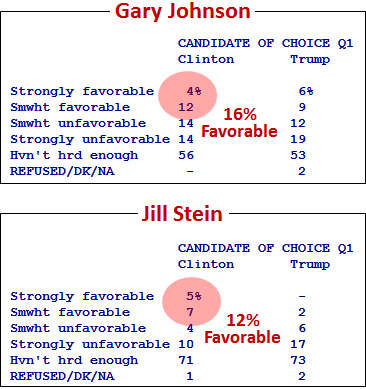 Hmmm. Maybe. The question is whether you can take the behavior of all voters and extrapolate it to the behavior of young voters. I’m not so sure about that. But even if we assume we can do that, I think it misses something.

Among people who are left of center, Jill Stein is a pretty obvious choice if Hillary Clinton isn’t your cup of tea. That’s especially true among former Bernie Sanders supporters who are far to Clinton’s left. But Gary Johnson doesn’t make any sense at all. At a policy level, he’s a left-wing disaster. Bernie Sanders would rather cut off his big toe than put Gary Johnson in the White House. So why is Johnson getting any love from voters on the left?

From an electoral point of view, my guess is that it’s a waste of effort for Clinton to try to peel off young Stein voters. Stein makes sense for them. But peeling off Johnson voters should be pretty easy. Just point out that he wants to repeal Obamacare, slash Social Security, supports Citizens United, and doesn’t want to do anything about climate change. He’s a pretty ripe target.