Hillary Clinton has proposed an increase in the estate tax:

Democratic presidential candidate Hillary Clinton would levy a 65% tax on the largest estates….generate $260 billion over the next decade, enough to pay for her plans to simplify small business taxes and expand the child tax credit….The Clinton campaign changed its previous plan—which called for a 45% top rate—by adding three new tax brackets and adopting the structure proposed by Sen. Bernie Sanders of Vermont during the Democratic primaries. She would impose a 50% rate that would apply to estates over $10 million a person, a 55% rate that starts at $50 million a person, and the top rate of 65%, which would affect only those with assets exceeding $500 million for a single person and $1 billion for married couples.

But but but, capital formation! Where will the American economy manage to dredge up any capital if we raise taxes on billion-dollar estates? Plus, as the straight shooters at the Wall Street Journal editorial page point out, there’s inflation. Using current dollars, a decade from now that top rate of 65 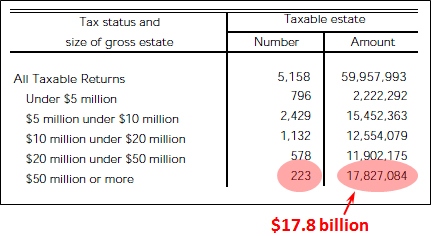 percent will apply to married couples with a mere $900 million in taxable assets. Surely we can’t be serious about this?

And how many people does this affect? Well, in 2014 there were a grand total of 223 estates worth $50 million or more. Given the power-curve nature of income, this suggests that there were maybe, oh, five estates worth $500 million. That’s something on the order of a thousand rich kids who will have to pay 15 percent more than the current top rate and maybe a dozen or so who would pay 25 percent more. Those dozen or so would inherit a mere $350 million instead of $600 million. That’s a grim fate, to be sure, but I suppose they’ll manage to soldier on.

As for all those farmers and family businesses who will be devastated? Forget it. There aren’t any—unless you consider the Trump Organization to be a small family business.

As with most policy proposals in this campaign, this is more for show than anything else. A Republican Congress won’t take up the estate tax again. Still, it’s designed to show whose side Hillary Clinton is on, and it does a pretty good job of that.