Bob Somerby reminds us today about the power of post-debate spin from the media. The teachable moment is October 3, 2000, the first debate between Al Gore and George Bush. Here’s a real-time reaction from Time’s Matt Cooper:

Bush looks slightly awkward to me. He’s flubbed a couple of lines….Gore, although looking like he’s made out of rawhide, is doing pretty well. His answers are more cogent….Bush just not getting off the lines he needs…..W. keeps sniffing during the off moments. It’s weird.

….Here in the last 15 minutes of the debate, I’m stuck by the different confidence levels of the two guys. Bush, who can be commanding on the stump, seems faltering, hesitant. Gore is brimming with confidence…. 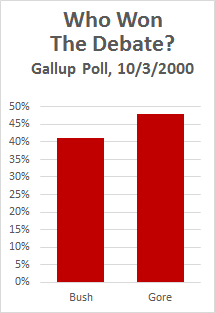 The other thing that strikes me is the way that Gore has beat up the guy without seeming to be too mean…..I’m writing this in the closing the moments of the debate. My guess is that post-debate polls will show Gore winning the debate 55-45. Bush needs to really study up before the next one.

Wow. Gore kicked ass! Bush kept sniffing! He also seemed a little lost—a fairly common real-time assessment. As it turns out, Cooper’s prediction was pretty close: Gallup’s overnight poll had Gore winning by 48-41 percent and others gave him an even bigger margin. So why is Gore widely remembered as the big loser in that debate? Here is Alfredo Lanier of the Chicago Tribune a couple of weeks after the debate:

Polls scored both candidates just about even, but that shifted after media analysts picked over the inconsistencies in some of Gore’s statements—and nitpicked about his annoying huffing, puffing and eye-rolling while Bush spoke.

Huffing, puffing, and eye-rolling? You mean sighing, don’t you? Here is CNN recapping what happened years after the fact:

Focus groups right after Al Gore and George W. Bush debated seemed to give a slight edge to Gore because he was more articulate, he had better answers, but once the television cameras caught that sighing, that constant look on his face where he seemed annoyed by the whole idea of having to be there with Bush, it seemed to underscore, as somebody said, as a teacher’s pet who knew all the answers but was annoying and irritating. And they kept playing it over and over again and it became parodies on the comedy shows and late night TV. Then people began to project onto Gore a personality trait of just annoyance and irritation of people in general and it became devastating for him to live that down.

Among people who actually watched the debate, Gore seemed fine. He knew his stuff, he attacked without seeming mean, and no one seemed to notice any sighing. But then the analysts put together a mix tape of every one of Gore’s sighs, and it was game over. Gore was a laughingstock.

Overnight polls are hardly infallible. But there’s not much question that the media reaction in the two or three days after a debate can make a big difference. Gore won the first debate in 2000, but only for a few hours. He lost it in the following week.