Many of you didn’t watch the debate, but you still want to get a taste of it. I understand, and I’m here to help. So here are the top 17 moments of Trump from Wednesday’s show.

Note: There were several passages of Palinesque babble from Trump that were basically incomprehensible. Examples here and here. I’m not including those.

I don’t think we should have justices appointed that decide what they want to hear.

WTF does this even mean? I think Trump was making a point about a strict interpretation of the Constitution, but it’s not really clear. 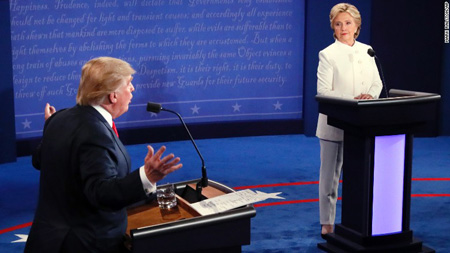 If you go with what Hillary is saying, in the ninth month, you can take the baby and rip the baby out of the womb of the mother just prior to the birth of the baby.

Um, no. That’s not how it happens, and Hillary Clinton doesn’t support it.

We have some bad hombres here, and we’re going to get them out.

Bad hombres! I assume t-shirts will be available soon?

She shouldn’t be allowed to run? Poor Donald, getting beat by a girl.

We’re bringing [economic growth] from 1 percent up to 4 percent. And I actually think we can go higher than 4 percent. I think you can go to 5 percent or 6 percent. And if we do, you don’t have to bother asking your question, because we have a tremendous machine. We will have created a tremendous economic machine once again.

[Obamacare] premiums are going up 60 percent, 70 percent, 80 percent. Next year they’re going to go up over 100 percent. And I’m really glad that the premiums have started — at least the people see what’s happening,

Trump stopped himself just barely before he said he was glad that premiums are rising. Apparently even he realized that it looked bad to be rooting for people’s misfortunes.

TRUMP: Look, Putin…from everything I see, has no respect for this person.

CLINTON: Well, that’s because he’d rather have a puppet as president of the United States.

Trump is supposedly the master of insults, but he frequently resorts to this kind of lame, kindergarten stuff. Here’s another one:

CLINTON: … unfit, and he proves it every time he talks.

TRUMP: No, you are the one that’s unfit.

WALLACE: Mr. Trump, even conservative economists who have looked at your plan say that the numbers don’t add up, that your idea, and you’ve talked about 25 million jobs created, 4 percent…

I’m including this because it’s a first from Trump: he interrupted not to insult anyone, but to add a technical correction that made his plan look a little less awesome. And it was even accurate!

Now let’s move on to the lies.

TRUMP: Look, she’s been proven to be a liar on so many different ways. This is just another lie.

CLINTON: Well, I’m just quoting you when you were asked…

TRUMP: There’s no quote. You’re not going to find a quote from me.

CLINTON: … about a potential nuclear competition in Asia, you said, you know, go ahead, enjoy yourselves, folks.

Back in May, Trump told Wolf Blitzer that other countries should pay us more for our protection. Blitzer asked if that meant allowing Japan and South Korea to become nuclear powers. “I am prepared to….all I’m saying is this: they have to pay. And you know what? I’m prepared to walk….if they don’t respect us enough to take care of us properly, then you know what’s going to have to happen, Wolf? It’s very simple. They’re going to have to defend themselves.” More here.

You ran the State Department, $6 billion was either stolen. They don’t know. It’s gone, $6 billion.

No. The State Department’s auditor found that paperwork for $6 billion in contracts was either incomplete or missing. That’s all.

CLINTON: He held a number of big rallies where he said that he could not possibly have done those things to those women because they were not attractive enough for them to be assaulted.

Yes, he said that. Hillary Clinton pointed this out immediately: “He went on to say, ‘Look at her. I don’t think so.’ About another woman, he said, ‘That wouldn’t be my first choice.’ He attacked the woman reporter writing the story, called her ‘disgusting,’ as he has called a number of women during this campaign.”

CLINTON: Well, you know, once again, Donald is implying that he didn’t support the invasion of Iraq. I said it was a mistake. I’ve said that years ago. He has consistently denied what is…

CLINTON: … a very clear fact that…

Clinton is right. You just have to Google it. Several months before the invasion, Howard Stern asked him if he supported the invasion of Iraq: “Yeah, I guess so; I wish the first time it was done correctly.”

About three months ago, I started reading that they want to get the leaders and they’re going to attack Mosul….And the only reason they did it is because she’s running for the office of president and they want to look tough. They want to look good.

This didn’t get a lot of attention last night, but Trump is saying here that Obama and the US Army are assisting in a major military engagement solely to make Hillary Clinton look good. At this point it’s hardly surprising to hear Trump say something like this, but that’s only because our collective bar for outrage has been lowered to gutter level by now. In normal times, this would have been a major bit of news and pundits everywhere would be gabbing about it.

TRUMP: She has no idea whether it’s Russia, China, or anybody else.

CLINTON: I am not quoting myself.

TRUMP: She has no idea.

TRUMP: Hillary, you have no idea.

CLINTON: … 17 intelligence — do you doubt 17 military and civilian…

TRUMP: And our country has no idea.

This is Trump rather astonishingly suggesting that our intelligence agencies have no idea who’s behind the recent of hack of Democratic emails. He’s been briefed on this, but he nonetheless refuses to acknowledge that Russia is most likely the culprit.

TRUMP: Such a nasty woman.

This was obvious bait from Clinton, and Trump dived headfirst into the trap. It was an entirely gratuitous interruption, and it’s resonated very, very badly. It has now been co-opted by women, and I’m sure you can already buy t-shirts with “Nasty Woman” logos on them.

….WALLACE: But, sir, there is a tradition in this country…that the loser concedes to the winner and that the country comes together in part for the good of the country. Are you saying you’re not prepared now to commit to that principle?

TRUMP: What I’m saying is that I will tell you at the time. I’ll keep you in suspense. OK?

This was the single biggest takeaway from the debate, and it drove most of the headlines. And it was a total own goal. Trump could easily have waffled slightly and made the same point: “I’ll accept the results unless there’s serious evidence of vote fraud.” Something like that would have been OK, but he declined to hedge even slightly.