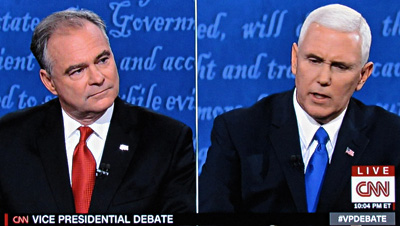 Did Tim Kaine “win” his debate with Mike Pence? Abby Phillip reports that this wasn’t the Clinton campaign’s goal in the first place:

Clinton and Kaine had a larger goal in mind than winning the debates themselves: to create a series of compelling sound bites that they planned to weaponize for the reminder of the campaign….Their clear objective: to record him and his running mate embracing, denying or evading controversial positions that Trump has taken in recorded speeches.

….“[Pence] claimed over and over and over again — he claimed, ‘He never said those things!’ ” exclaimed conservative radio host Glenn Beck on Wednesday. “We’re not living in the 1800s. We can go back to the clips on YouTube.”

And that’s exactly what the Clinton campaign did. Shortly after the debate Tuesday, the Clinton campaign tweeted out a glossy new site at hillaryclinton.com/literallytrump. The site highlighted dozens of moments “mentioned at the debate,” most of them by Kaine, with citations to back them up and the “share” button never too far away.

Kaine’s over-aggressive style didn’t make him look good on Tuesday, but Kaine didn’t care. He was willing to take one for the team. Unlike Mike Pence, who resolutely refused to defend his boss, Kaine understood that the purpose of his debate wasn’t to make Tim Kaine look good. It was to help Hillary Clinton win an election.

This is typical of the Clinton campaign’s buttoned-down but very focused strategy. And it’s working:

Mr. Trump has already slipped perceptibly in public polls, trailing widely this week in Pennsylvania and by smaller margins in Florida and North Carolina — three states he cannot afford to lose. But private polling by both parties shows an even more precipitous drop, especially among independent voters, moderate Republicans and women, 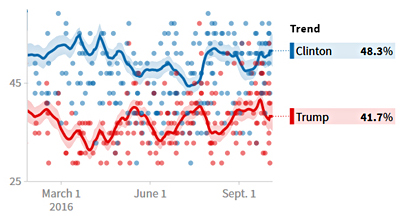 according to a dozen strategists from both parties who spoke on the condition of anonymity because the data was confidential.

Generally speaking, Hillary Clinton’s strategy has been to needle Trump and then stand out of the way and let him get as much media attention as he wants while he implodes. There are weeks here and there when Trump is able to simulate being an adult and the strategy doesn’t work. But over the long term? It’s working great. And since it’s too late to fire his campaign team yet again in a vain search for someone who can talk sense into Trump, it’s pretty likely to keep working. Pollster has Trump down by 6.6 percent right now, and if private polls show him doing even worse, then both he and the Republican Party are in a world of hurt.