Tim Fernholz reports today that countries around the world have lost billions of dollars in economic output by shutting down the internet for various reasons:

The countries most affected? India, accounting for $968 million in lost output….[shut] off internet service during school exam periods to deter cheating. To keep students honest, India imposed a ban from 9am to 1pm in certain areas.

Say what? They shut down the whole damn internet for four hours to keep kids from cheating on exams? Yes indeed. And they aren’t the only ones:

India: “Mobile internet services will be blocked from 9 am to 1 pm in Ahmedabad….The Revenue Talatis Recruitment Exam is being conducted by ‘Gaun Seva Pasandgi Mandal’ (Gujarat State Subsidiary Selection 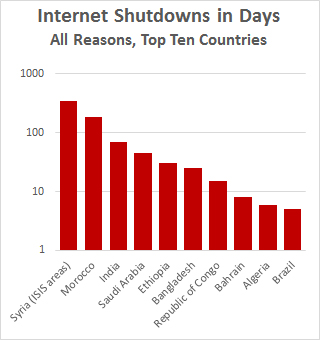 Board or GSSSB) across the state….Considering the sensitive nature of the exam for recruitment of talatis, internet service providers have been asked to shut down all internet-based social media services from 9 am to 1 pm to prevent the misuse of mobiles during the exam.”

Uzbekistan: “Uzbek authorities suspended Internet and messaging services across the country on August 1 to prevent cheating at university entrance exams….The restrictions on the additional services have become an annual practice on exam day as authorities fight against corruption and cheating.”

Algeria: “Algerian authorities have temporarily blocked access to Facebook, Twitter and other social media sites to try to stop cheats posting high school exam papers online, state media reported on Sunday….’This is to protect students from the publication of false papers for these exams.’ “

Iraq: “Iraq has shut down the entire country’s internet in efforts to prevent students from cheating in exams….Wondering why the Iraqi government chose to take such a drastic step just for sixth grade finals? The reason why preventing sixth graders from cheating is such a high priority to the government is because, according to Iraqi law, education is compulsory only till the 6th grade. As a result, the pressure is fairly high on sixth graders to score well, as those who don’t make the cut are almost definitely pulled out of school.”

As you can see, this practice extends all the way from sixth grade to high school to universities to civil service exams. I guess building Faraday cages at all the test centers was too expensive, while strip searching every test taker was considered a step too far. The only option left was to shut down the internet for everyone.

All this said, the most common reason for shutting down the internet was in response to protests and other forms of civil strife. So I guess everyone is sort of used to it.