Controlling illegal immigration has never seemed all that hard to me. The vast majority of those who are in the United States illegally—either by crossing the border or overstaying their visas—are here to find jobs. So if you want to reduce illegal immigration, you need to make it hard for employers to hire anyone who’s not 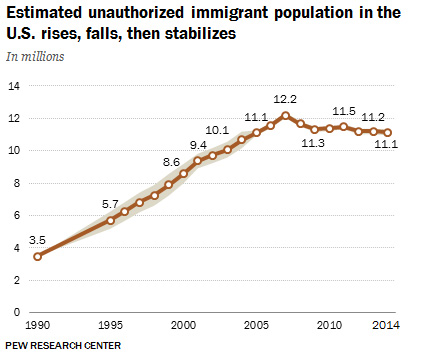 authorized to work. But in the LA Times today, Wayne Cornelius says that’s not in the cards:

There has never been much public or congressional appetite for a harsh crackdown on employers, especially the small businesses that depend most heavily on workers in the U.S. illegally. They are pillars of their communities and campaign contributors. Besides, immigration agents have had higher enforcement priorities — tracking down immigrants who committed serious crimes or pose national security threats.

President-elect Trump has called for full implementation of an electronic employment eligibility verification system called E-Verify….E-Verify, however, is no panacea. It does not prevent immigrants who are ineligible to work from getting jobs by providing valid information pertaining to other people (borrowed documents). And as long as penalties are weak, requiring employers to use E-Verify will not significantly reduce violations.

Will Congress approve crippling fines or even prison sentences for business owners who ignore E-Verify rules? Will lawmakers direct the Justice Department to make these scofflaws a top priority? Unless and until that happens, many employers will continue to view hiring those in the U.S. illegally as a low-risk, high-reward crime. In 2014, the probability that one of the nation’s 6 million employers would be investigated for violating immigration laws was 0.03%.

I don’t personally care all that much about the level of illegal immigration. The chart above, from Pew Research, shows the current numbers, which strike me as reasonable. But obviously a lot of people do care, and most of them are Republicans. They talk tough, they build walls and fences, and they promise to hire lots of border enforcement agents. But this is all a sham. If the economic incentives continue to exist, so will illegal immigration.

The problem is that Republicans can’t come to grips with their two main constituencies. Social conservatives generally hate undocumented workers and want to deport them all. Business conservatives want no such thing. So Republicans thunder on TV that borders are borders, and by God we need to control them. Then they quietly go back to their jobs and do nothing.

The obvious way to cut down on illegal immigration has always been to go after employers. Not only does this attack the root of the problem, but it’s practically self-funding. You hire lots of ICE auditors and then pay for them by levying big fines on employers who break the law. As the problem diminishes, you collect less money but you also need fewer auditors.

Bottom line: Anyone who claims to be fiercely opposed to illegal immigration but doesn’t support strong employer sanctions is just lying to you.