I’ve written a post or two about the main reasons Hillary Clinton lost the election, and I always nod to the fact that there are other, smaller reasons too. One of these smaller reasons is that Clinton herself made mistakes, something that Harold Pollack noted a few days ago. So I asked him what he thought the campaign’s three biggest miscues were. He wrote a long post about this, which you should read since it contains a lot of discussion and nuance. In normal bloggy fashion, however, I’m going to ignore all that. Instead, here are Pollack’s answers, along with my comments:

Creating the email and speech problems, and being brittle and defensive about cleaning them up. No argument here. We both agree that these problems were wildly overblown by the press, but nonetheless they were problems that Clinton brought on herself. It’s all part of her greatest character deficit: pushing rules to the boundaries and then being defensive and secretive about it when her actions come to light. The former is a bad habit, and the latter just makes the press even more ravenous than they’d ordinarily be. It’s a toxic combination.

Overconfidence and complacency across the political spectrum. In retrospect, this is obviously true. But even now, this hardly strikes me as a campaign problem per se. Clinton and her fellow Dems were confident because every poll showed them well ahead. I assume that all her internal polling showed the same thing. In the end, though, that polling was apparently off by about 3 points, and more than that in the famous trio of Pennsylvania, Michigan, and Wisconsin. That’s a big miss.

So what happened to the polls? Did Clinton’s internal polling show her way ahead? If so, how did it fail so badly? That’s what I’d like to know. I think anybody would have been overconfident if their polling showed them winning in a walk.

Signaling to older rural white voters that we didn’t want them, and indeed would leave them behind. This is hard to assess. There’s no question that Democrats have steadily lost the support of the white working class over the past two decades. This is something that goes far beyond Hillary Clinton. But did 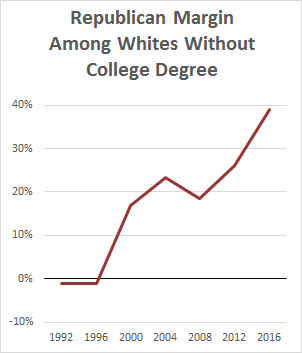 the white working class leave because they thought Republicans were likely to bring their jobs back and make their lives better? That hardly seems likely, given that during this entire period Republicans have campaigned on a steady diet of corporate deregulation and tax cuts for the rich.

But if that’s the case, we’re back to optics and race—and Trump appealed explicitly to both. He loudly and persistently pretended to care about the white working class while offering nothing much that would actually affect them. And he was pretty plainly pro-white, which obviously appealed to at least some of them. Clinton’s problem is that she isn’t cynical enough to do the former and not loathsome enough to do the latter.

Could she still have done more? Of course. Politicians routinely use symbols to demonstrate respect for groups even if their platforms don’t offer an awful lot of help at a concrete level. Clinton didn’t do that, and it turned out to be a mistake. I can’t bring myself to blame her too much for this, since it’s all hindsight, but it was still a mistake—and an especially big one since she clearly failed to understand what was happening in three states that were so critical to her that they were called the “blue firewall.”