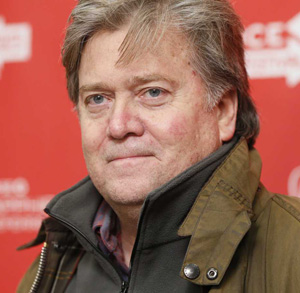 Unsurprisingly, Donald Trump chose Steve Bannon, his campaign chairman, to be his “chief strategist” in the White House. No one knows quite what that means, but at the very least it means he’ll have the ear of the president for the next year. But what kind of person is Bannon?

“President-elect Trump’s choice of Steve Bannon as his top aide signals that white supremacists will be represented at the highest levels in Trump’s White House,” said Adam Jentleson, a spokesman for Senate Minority Leader Harry Reid (D-Nev.), in a statement Sunday night.

“It is easy to see why the KKK views Trump as their champion when Trump appoints one of the foremost peddlers of White Supremacist themes and rhetoric as his top aide. Bannon was ‘the main driver behind Breitbart becoming a white ethno-nationalist propaganda mill,’ according to the Southern Poverty Law Center.”

Goodness. People sure do overreact when someone isn’t quite as politically correct as they’d like. Let’s set the record straight and take a more nuanced look at who Bannon really is. Here’s his ex-wife:

Bannon was head of Breitbart News, which embraced the “alt-right.” Breitbart itself explains how the alt-right has absolutely nothing to do with white supremacism:

There are many things that separate the alternative right from old-school racist skinheads (to whom they are often idiotically compared), but one thing stands out above all else: intelligence. Skinheads, by and large, are low-information, low-IQ thugs driven by the thrill of violence and tribal hatred. The alternative right are a much smarter group of people — which perhaps suggests why the Left hates them so much. They’re dangerously bright.

The views of the alt-right are widely seen as anti-Semitic and white supremacist….Most of its members are young white men who see themselves first and foremost as champions of their own demographic. However, apart from their allegiance to their “tribe,” as they call it, their greatest points of unity lie in what they are against: multiculturalism, immigration, feminism and, above all, political correctness.

“They see political correctness really as the greatest threat to their liberty,” Nicole Hemmer, University of Virginia professor and author of a forthcoming book Messengers of the Right, explained on Morning Edition. “So, they believe saying racist or anti-Semitic things — it’s is not an act of hate, but an act of freedom,” she said.

Being racist is “an act of freedom”! Ben Shapiro, a conservative who used to work for Bannon, said this:

Under Bannon’s Leadership, Breitbart Openly Embraced The White Supremacist Alt-Right. Andrew Breitbart despised racism. Truly despised it. He used to brag regularly about helping to integrate his fraternity at Tulane University. He insisted that racial stories be treated with special care to avoid even the whiff of racism. With Bannon embracing Trump, all that changed. Now Breitbart has become the alt-right go-to website, with [Milo] Yiannopoulos pushing white ethno-nationalism as a legitimate response to political correctness, and the comment section turning into a cesspool for white supremacist mememakers.

Here’s a look at some of Breitbart’s work under Bannon’s leadership:

Trump hired the head of Breitbart “News” to be CEO of his campaign. Here’s a sample of their work: pic.twitter.com/y8loOnkbNu

A sampling of Breitbart headlines under Stephen Bannon https://t.co/ujvgKgFv2w pic.twitter.com/iB2iz9WwCl

That all seems perfectly reasonable. Sure, Bannon may be “controversial,” but take a look at his staff: 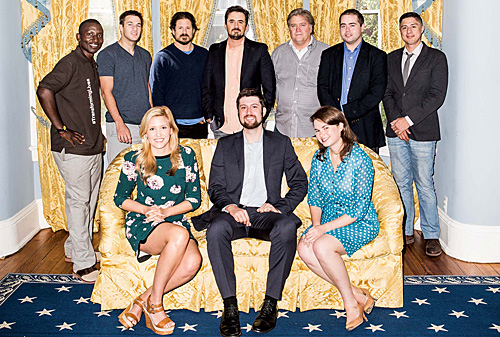 There’s a black guy right there, over on the far left. And yet people still call Bannon a racist! This is political correctness run amok.