Part three of our series of charts from the Economic Report of the President is all about banking. Mostly, it’s a trip down memory lane. Here’s a look at the worldwide market in derivatives over the past couple of decades: 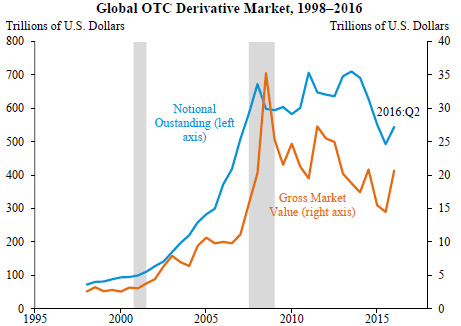 The volume of derivatives went from $10 trillion to $35 trillion in two years starting right before the market crashed. Here’s another perspective on that: 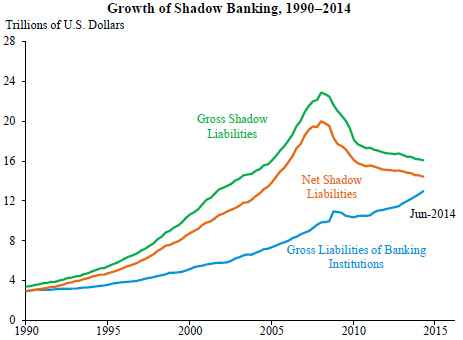 In 1990, shadow banking was about the same size as the traditional banking sector. By 2007 it was more than twice as big. Just before the crash, shadow banking comprised two-thirds of the entire banking industry and it was almost entirely unregulated. This is why I was happy that Hillary Clinton at least mentioned shadow banking during the campaign.

Here’s how all this affected traditional banks: 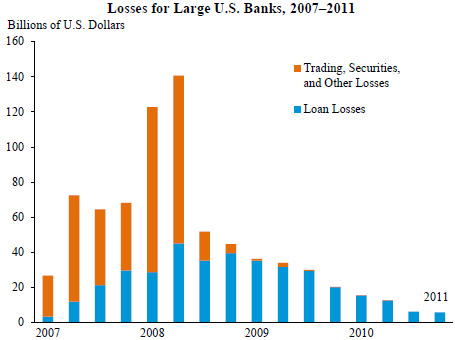 In 2007, losses from trading amounted to about $30 billion. By 2009 that had skyrocketed to about $100 billion—and that’s in addition to about $40 billion in traditional loan losses. This is what happens when you start with a housing market that’s already in bubble territory and then egg it on with insane levels of rocket science derivatives, most of them unregulated bastard offspring of the shadow banking sector.

So what’s happened since then? We had a huge crash, the Fed instituted higher capital ratios for “systemically important financial institutions,” and we passed the Dodd-Frank reforms. Here’s what banks look like now: 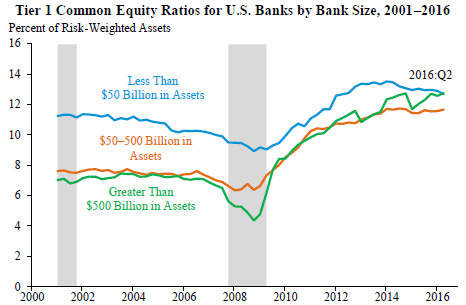 Before the Great Recession, the biggest banks (green line) had Tier 1 equity ratios of about 7 percent. That’s why they couldn’t weather the crash. Today they’re above 12 percent. Is that enough? Maybe not. But it’s a helluva lot better than it used to be.

Finally, here’s an intriguing chart that shows one of the specific consequences of Dodd-Frank: 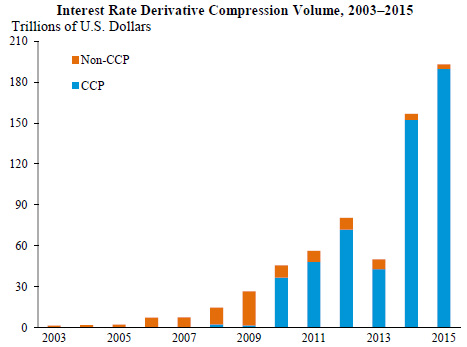 Most single-name derivatives are now cleared through a central clearinghouse, which makes it easy for traders to cancel out mirror-image positions they hold. This is called “compression,” and it reduces the total volume of derivatives and increases the safety of the financial system. Today, derivatives worth $200 trillion (notional) are compressed out of existence each year.

Needless to say, Republicans are hellbent on repealing Dodd-Frank. Sure, it makes the banking system safer and helps protect consumers, but big banks don’t like it, so that’s that. The party of Donald Trump, the working man’s president, will do whatever Wall Street tells them to do. Funny how that works, isn’t it?