A few days ago I wrote about an odd Fox News report which said that SNAP (food stamp) fraud was at an “all-time high” of $70 million. The odd part of this was not that Fox was lying about SNAP fraud being at an all-time high. What do you expect from Fox? The odd thing was that actual SNAP fraud clocks in at nearly a billion dollars. Why did Fox lowball it? I couldn’t figure out where Fox got its number, and as near as I could tell the Department of Agriculture hadn’t published anything about it more recently than 2011 anyway.

Today, the Washington Post’s Erik Wemple does some shoe-leather reporting and makes a few phone calls:

The Agriculture Department is asking Fox News to correct a report from Tuesday morning’s edition of “Fox & Friends” alleging new heights for food-stamp fraud in the United States….“We are not quite sure where this came from,” a USDA spokesperson tells the Erik Wemple Blog. “We saw that there was a story on Breitbart. We have not issued a report on this recently. There is no new rate that we’ve published. So we’re not quite sure why they’re so interested in stirring this up.”

….A Fox News spokesperson indicates that this matter will be addressed on tomorrow’s program.

OK then. It sounds like someone at Fox just made this up, though I’m sure they’ll put a more positive spin on it than that. I’m also sure they’ll be eager to correct the fact that SNAP fraud is actually far higher than they suggested. But given all this, why did the Post’s Philip Bump include the following graphic in his story about this on Wednesday? 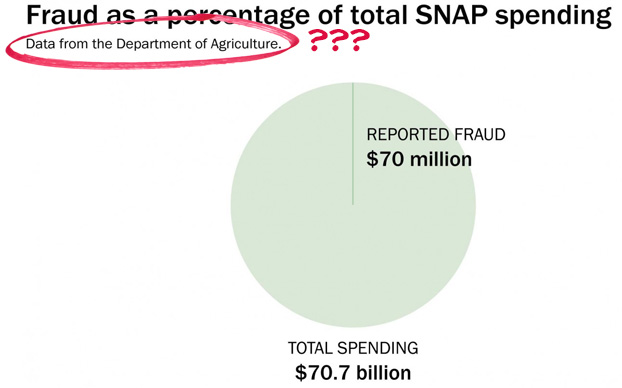 It’s fine to write about Fox’s misinformation, but why was it credited to the Department of Agriculture? That’s how Fox credited it, to be sure, but that credit shouldn’t have been passed along without verifying it independently.

One final note: this story demonstrates the value of being numerate. The reason I first noticed it was because the $70 million figure was so obviously absurd. SNAP is a $70 billion program, and it’s nuts to think that it could have a fraud rate that low. Mother Teresa’s mission in Calcutta probably had a higher fraud rate than that. Anybody with even the smallest working knowledge of SNAP, normal fraud rates, and basic arithmetic should have heard alarm bells going off immediately.

But no one did. Nearly all of the response to the Fox report was either (a) mockery of their suggestion that SNAP should be ended, or (b) mockery of their belief that 0.1 percent was a high rate of fraud. Nobody really seemed to notice that it couldn’t possibly be correct. More numeracy, please.