Tyler Cowen says that UCI professor Peter Navarro is “one of the most versatile and productive American economists of the last few decades.” Matt Yglesias says Navarro is an idiot. Who’s right?

So if our trade balance goes up from -$500 billion to $0, Navarro said, GDP will go up $500 billion and the government will collect a lot of extra taxes. Hooray! But as Yglesias points out, this is comic-book-level nonsense.1 Let me offer an analogy:

So if I cut labor costs in half, corporate profits will go up. Right? I think you can see that this is unlikely. If you fired half your workers, you probably could no longer produce anything and your company would go bust. If you cut everyone’s wages in half, you’d suffer a steady exodus of your best people and probably end up far less profitable. If you replaced half your workers with machines, profits 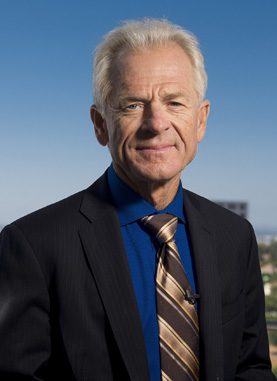 might indeed go up, but not by the amount of payroll you save. You’d have to account for the capital cost of the machines—which would probably reduce investment income—and the cost of maintenance—which would increase other costs. Bottom line: depending on how you do this, lots of different things could happen.

In the case of GDP, it’s true that everything in the formula has to add up, since this formula defines what GDP is. But if the trade balance goes up, there are several obvious possibilities. Consumption might go down. Investment might go down. Government spending might go down. In fact, once all the dust has settled, overall GDP might ultimately go down, stay the same, or go up. The real answer is that you’d need to model out an actual plan and figure out where it reaches equilibrium. Navarro knows this perfectly well.

So what is Navarro? Brilliant economist or idiot? Neither one. He’s someone who used to be a versatile and productive economist and is now a China-obsessed fanatic2 willing to say anything for the chance of a job in the Trump administration. He hasn’t lost 50 IQ points, he’s merely become so fixated on the dangers of Chinese trade that he no longer cares about economics. He cares only about saying things that might build support for his preferred policies, regardless of whether they’re true.

In other words, he’s now just another dime-a-dozen political hack. Trump will keep him around as long as his PhD is useful and then toss him aside.

1No offense meant to comic books.

2Three of his five most recent books are: The Coming China Wars, Death by China: Confronting the Dragon, and Crouching Tiger: What China’s Militarism Means for the World.