Judd Legum of ThinkProgress reports that “members of the Trump Organization” pressured the government of Kuwait to switch their annual National Day celebration from the Four Seasons to the Trump International:

In the early fall, the Kuwaiti Embassy signed a contract with the Four Seasons. But after the election, members of the Trump Organization contacted the Ambassador of Kuwait, Salem Al-Sabah, and encouraged him to 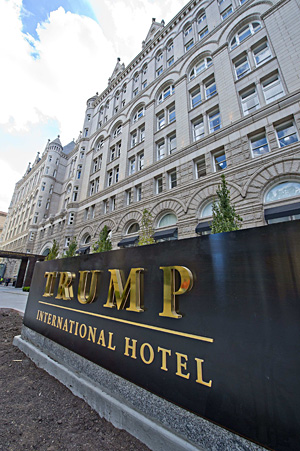 move his event to Trump’s D.C. hotel, the source said.

Kuwait has now signed a contract with the Trump International Hotel, the source said, adding that a representative with the embassy described the decision as political. Invitations to the event are typically sent out in January.

Abdulaziz Alqadfan, First Secretary of the Embassy of Kuwait, told ThinkProgress last week that he couldn’t “confirm or deny” that the National Day event would be held at the Trump Hotel. Reached again Monday afternoon, Alqadfan did not offer any comment. An email sent directly to Ambassador Al-Sabah was not immediately returned.

Legum writes that his source is a person “who has direct knowledge of the arrangements between the hotels and the embassy,” and that he was able to “review documentary evidence confirming the source’s account.” I have a feeling that a lot of foreign governments are going to be getting phone calls from the Trump Organization over the next four years.

Now, Trump’s defense, if he bothers to offer one, will be that nothing happened. Someone in his company made a sales call to the Kuwaiti government, offered them a deal they couldn’t refuse, and closed the business. What’s wrong with that? But Newt Gingrich has a whole different idea about how Trump should deal with potential violations of the law:

“We’ve never seen this kind of wealth in the White House, and so traditional rules don’t work,” Gingrich said Monday during an appearance on NPR’s “The Diane Rehm Show” about the president-elect’s business interests. “We’re going to have to think up a whole new approach.”

And should someone in the Trump administration cross the line, Gingrich has a potential answer for that too.

“In the case of the president, he has a broad ability to organize the White House the way he wants to. He also has, frankly, the power of the pardon,” Gingrich said. “It’s a totally open power. He could simply say, ‘Look, I want them to be my advisers. I pardon them if anyone finds them to have behaved against the rules. Period. Technically, under the Constitution, he has that level of authority.”

Jeez, it’s too bad we didn’t have this Newt Gingrich around in the ’90s. He and Bill Clinton would have gotten along a lot better if he’d had this kind of charitable attitude toward presidential ethics back then.

On a more serious note: Are you fucking kidding me? The Trump Organization is going to poach business away by “encouraging” foreign governments to see the benefits of holding their events at a Trump property? And Newt Gingrich thinks we should just go ahead and change the law to allow this kind of thing? And if nobody salutes when that gets run up the old flagpole, then Trump should just go ahead and issue pardons to anyone who gets harassed by overzealous prosecutors.

What country do I live in, anyway?