Even by my standards, the blog has been pretty chart heavy lately. I’m not sure why, but I think it’s to take my mind off the unfolding disaster of Donald Trump. Muddling around in Excel seems pretty soothing by contrast.

(I mean, Trump just told us he’s not going to bother with intelligence briefings at all because “I’m, like, a smart guy.” And as near as I can tell, the entire political class of the country hasn’t exploded en masse. WTF is going on here?)

Why the decline? To demonstrate the answer, I have two charts for you. Here they are, with explanations below:

The chart on the left shows mean real incomes over the past eight decades. The orange lines indicate a guesstimate of standard deviation as a proxy for income inequality. If I keep that standard deviation constant through the years (at about one-third of income), the number of children we’d statistically project to have higher incomes than their parents goes down from 91 percent to 74 percent. The decline is due to the fact that incomes are growing more slowly than they used to.

The chart on the right is identical, except it uses the figures that Chetty’s team came up with based on real-life parents and children. The number of children who actually have higher incomes than their parents declined from 91 percent to 50 percent.

In other words, although some of the effect is due to slow income growth, much more of it is due to something else. And that something else is growing income inequality. Here is Chetty’s chart (note that he uses birth years rather than age-30 years): 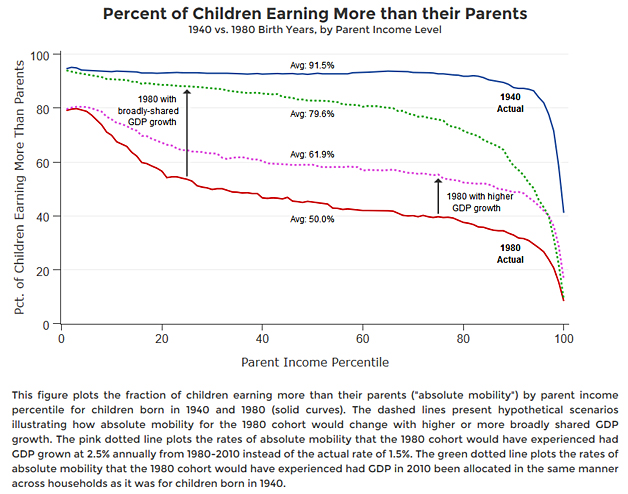 Now then, since Chetty has a perfectly good chart, why did I bother producing a different one? And not just different, but arguably more confusing than Chetty’s. It’s because I was a little skeptical of Chetty’s results and wanted to work out some things for myself. Gotta do something to keep from thinking about Donald Trump, after all.

But when I was done, my statistical guesses matched Chetty’s empirical figures pretty closely. So I shrugged, and then, having done all this work, I figured I might as well share it. Maybe it just makes things more confusing or maybe it helps. Who knows? But I have to do something to keep from jumping off a ledge, don’t I?