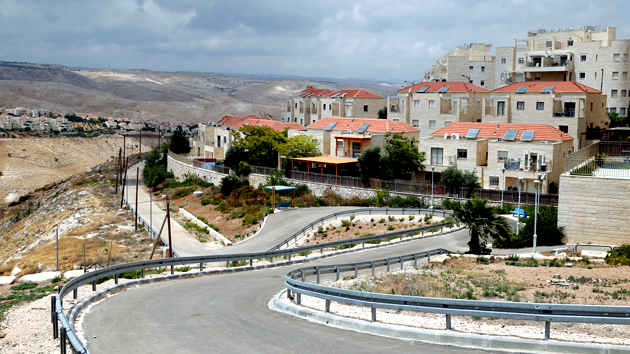 Houses in the Israeli settlement of Maale Adumim in the occupied West Bank, near Jerusalem. Members of the governing coalition are pressing for Israel to annex Maale Adumim.Baz Ratner/Reuters via ZUMA

It’s full speed ahead for creating yet more facts on the ground in Israel. The LA Times reports:

The city of Jerusalem, emboldened by anticipated support from the Trump administration, on Sunday authorized the construction of some 560 new homes in areas of the city claimed by the Palestinians as a capital of their future state….A new era has begun,” Education Minister Naftali Bennett, the leader of the pro-settlement Jewish Home party, told Israeli reporters, calling on government ministers to support a decision to extend Israeli sovereignty to the West Bank.

….Members of Netanyahu’s coalition are pushing for a parliamentary bill to annex Maale Adumim, a sprawling settlement east of Jerusalem with a population of tens of thousands. Annexing it would nearly sever the West Bank between north and south.

“There is a giant change in the policy of the U.S., and we have to take that change into account — for our own benefit,” said Ofir Akunis, a lawmaker from Netanyahu’s Likud party, who said he would support annexation.

Considering that Barack Obama spent eight years trying to slow down Israeli settlements and it had no evident impact, we can only imagine what’s going to happen now that Israelis have a US president who openly approves of annexing every square meter of land they can.

I just don’t know how this all turns out. It’s been obvious for a while that the two-state solution is dead. Prime Minister Netanyahu has obviously never supported it, and demographic changes have pushed Israeli politics to the point where Netanyahu is actually a bit dovish compared to the rest of his coalition. They’re just going to keep building and building until something stops them—and at the moment, I’m not sure what something could be. If the entire rest of the world literally stopped trading with Israel, cut off diplomatic relations, and refused entry to all Israeli citizens—that might do it. But that’s not going to happen, and I’m not sure that would be enough anyway as long as the US is still in Israel’s corner.

I guess Jared Kushner will be tasked with “negotiating” something that will end up making all of this official policy. The rest of us are just going to have to figure out how to respond.