Students in a single elementary grade classroom differ in age by about 12 months. Do the older students do better than the younger students? Plenty of evidence says yes, but all the existing studies have shortcomings, says Pablo Peña, “the most important of which is that their identification strategies implicitly assume the absence of selection into gestational seasons.”

Gestational seasons? Let’s not get into that. Long story short, Peña found a school district in Mexico that suddenly changed its age cutoff from September 1 to December 1 a few years ago and was willing to provide student test data broken down by birthdate. Unlike many studies, which only look at a data for a single year, Peña was able to track students across seven years. Here’s the basic data after the change in age cutoff: 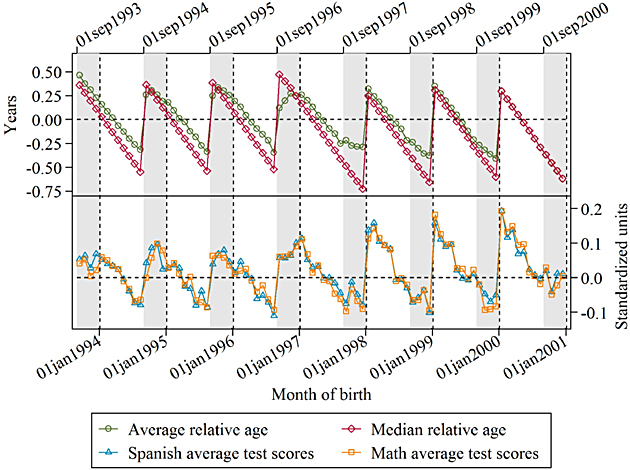 The bottom half of the chart shows scores on standardized Spanish and math tests, and year after year the older kids do better. However, one encouraging finding here is that the age effect fades over time. Eight-year-olds (far right of chart) show very large differences in standardized scores, while 14-year-olds (far left) show a smaller range of differences.

But now we’d like to know the cause of these differences. Is it a function of absolute age? Or is it a function of relative age within a classroom? According to Peña, it’s both. For the younger kids, their relatively poor showing is strictly a function of age. By comparing results with a neighboring school district, he concludes that their scores would be the same as the older kids if they were tested a few months later. The older children, however, suffer a bit from having younger kids in the same classroom. “Holding age at test constant, being older relative one’s classmates has a negative effect on test scores.”

The long-term effect of all this is quite small. However, younger kids do have a slightly worse chance of getting into college, since they’re younger when they take college admissions tests. This results in poorer scores due solely to their age, not their mental abilities. Peña estimates a difference of about 1 percent.

It’s not clear to me how much this matters, or whether there’s anything we can do about it. You have to have a cutoff date, after all. However, it does suggest that “redshirting,” the practice of deliberately holding back your child a year so she’ll be the oldest in her class, has mixed results. Overall, her education will probably suffer a bit. But her odds of doing well on college entrance exams will be slightly better. It sounds like a wash to me. Parents probably ought to stop worrying about it and spend their time on more productive pursuits instead.