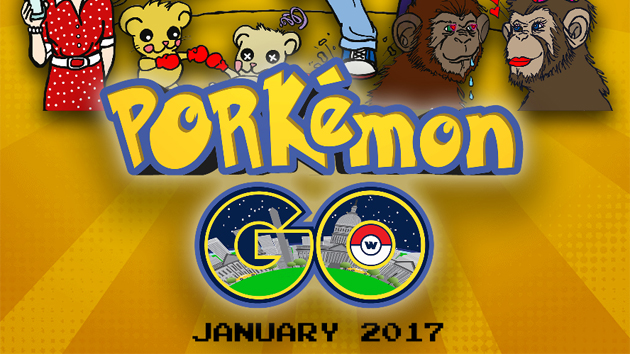 Sen. Jeff Flake, who has taken up the mantle of Sen. Tom Coburn, who in turn was taking up the mantle of William Proxmire’s infamous “Golden Fleece” award, has released the 2017 issue of Wastebook, documenting all the dumb ways the government is spending your hard-earned dollars. In keeping with tradition, it has a pun-heavy theme: this year it’s Porkémon Go—get it? Pork-émon!—which probably seemed pretty funny a few months ago. But popular fads are fickle things.

In any case, the bulk of the report is pretty typical. Flake is unhappy that President Obama wants money to fight Zika when he’s already squandering money on things that “most would consider obvious or even absurd”:

Researchers were literally playing with dolls to prove what every child already knows—girls are more likely to play with Barbie dolls than boys—with support from National Science Foundation (NSF) and National Institutes of Health (NIH) grants totaling $300,000.

Studies on the habits of college students funded with $5 million of NIH grants found fraternity brothers drink, smoke and generally party more than other students. They also sleep in later, which led the researchers to speculate “one explanation for this finding is that Greeks students recognize their sleep needs.” Perhaps a more likely reason is that they are sleeping off their party lifestyle.

NIH is also drilling down to determine why some people are afraid of the dentist as part of another $3.5 million research project. The researchers found “fear of pain has been shown to be a critical component.”

Your mileage will vary on whether you find this hilarious or not, but it’s worth noting that even a dedicated investigator like Flake found only $5 billion in waste, of which $3 billion was for one project: the California bullet train. Now, I happen to agree with Flake that the train is a bad use of money, but it’s certainly not waste. The money is being used to build a train. Flake and I happen to think the train is a bad idea, but the definition of waste is not “stuff you and I don’t like.”

In any case, take out that one project and you’re left with $2 billion, which is something like 0.2 percent of the discretionary federal budget. That’s actually…not bad. I wish my own household ran that efficiently. It’s worth adding that of that $2 billion, about half seems to be legitimate waste1 while the other half is just sophomoric jeering at scientific studies that are perfectly reasonable but sound kind of funny. So the actual waste is probably closer to 0.1 percent of the budget.2

It kinda makes you wonder how much the US government spent researching and writing this report?

1This is just my horseback guess based on flipping through the report.

2This doesn’t matter, of course. What matters is that Flake has presented the right-wing media with a nice sourcebook of funny-sounding projects that they can recycle for the next 12 months as evidence of idiotic government spending. Someone should ask for federal funding for a project to track how many times Flake’s examples get recycled throughout the next year by Fox, Limbaugh, Drudge, etc.