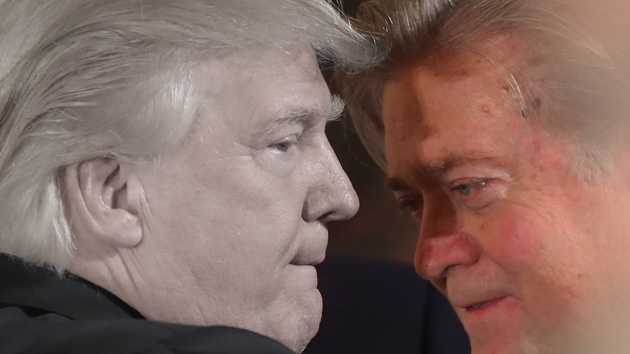 I mentioned this in the previous post, but it probably deserves a post all its own. Here are Brian Bennett and Noah Bierman of the LA Times, reporting on how Trump’s top advisors believe his immigration order is just the beginning of a much larger crackdown:

Trump’s top advisors on immigration, including chief strategist Steve Bannon and senior advisor Stephen Miller, see themselves as launching a radical experiment to fundamentally transform how the U.S. decides who is allowed into the country and to block a generation of people who, in their view, won’t assimilate into American society.

….The chief architects of Trump’s order, Bannon, Miller and National Security Advisor Michael T. Flynn, forged strong bonds during the presidential campaign. The trio, who make up part of Trump’s inner circle, have a dark view of refugee and immigration flows from majority-Muslim countries.

….“We don’t want a situation where, 20 to 30 years from now, it’s just like a given thing that on a fairly regular basis there is domestic terror strikes, stores are shut up or that airports have explosive devices planted, or people are mowed down in the street by cars and automobiles and things of that nature,” the official said.

Steve Bannon, of course, has made it very clear on previous occasions what he thinks of Islam. In a presentation to a Vatican conference a couple of years ago, he attributed the growing power of the populist right to two things. First, there was the Great Recession, which showed ordinary people that capitalism was rigged against them. And second, there is Islam:

I believe the world, and particularly the Judeo-Christian West, is in a crisis.

….We are in an outright war against jihadist Islamic fascism. And this war is, I think, metastasizing far quicker than governments can handle it….It’s going global in scale, and today’s technology, today’s media, today’s access to weapons of mass destruction, it’s going to lead to a global conflict that I believe has to be confronted today. Every day that we refuse to look at this as what it is, and the scale of it, and really the viciousness of it, will be a day where you will rue that we didn’t act.

….If you look back at the long history of the Judeo-Christian West struggle against Islam, I believe that our forefathers kept their stance, and I think they did the right thing. I think they kept [Islam] out of the world, whether it was at Vienna, or Tours, or other places….And they were able to stave this off, and they were able to defeat it, and they were able to bequeath to us a church and a civilization that really is the flower of mankind, so I think it’s incumbent on all of us to do what I call a gut check, to really think about what our role is in this battle that’s before us.

Bannon acknowledges that the populist right includes “some aspects that may be anti-Semitic or racial,” but that doesn’t bother him much. They provide useful shock troops, and eventually “it all gets kind of washed out” anyway.

So: do you think Bannon’s intent when he orchestrated Trump’s immigration order was anti-Muslim? Hell, he’s all but admitted it. Bannon believes we’re in the middle of a global war, and when push comes to shove, he’s on the side of the white, Christian West, and against the brown, Muslim East. And he believes there’s little time to waste.

FDR felt the same way about the Axis in 1940, but he knew the country wasn’t ready to go to war. He needed a provocation, and it needed to be something big enough to rally the country behind. He passed up several opportunities because they were too small to accomplish what he wanted, but eventually the Japanese attacked Pearl Harbor and that was all he needed. The country united behind him and we spent the next four years dedicated to the unconditional surrender of fascism.

Friday’s immigration order is merely the opening salvo in Bannon’s war, designed to stir up the troops and begin the process of targeting Muslims as the enemy. Think of it as Lend-Lease. To truly get the United States—and the West—dedicated to the unconditional surrender of Islam, he needs a mammoth provocation. Even 9/11 wasn’t enough. He’s going to need something bigger.

Would he be willing to engineer such a provocation? Probably. Could he actually do it? That’s a lot harder to answer. But I don’t doubt that, one way or another, this is his ultimate goal. That’s why he’s now a principal on the National Security Council. That’s why he’s an illegal immigration hawk: not because he cares much about Mexico, but because it gains him the right kind of allies for a war he does care about. And it’s why he appeals to white nationalists and far-right European parties: not because he believes their racial nonsense (probably), but because they’re exactly the kind of people who are most likely to support a war against Islam. Bannon is a smart guy, and it’s the logical place to start.

As Josh Harkinson has reported, Bannon is deadly serious about this war, and there’s no way he’ll get it just by jawboning. It will only happen if there are a lot of dead bodies somewhere in America, and that means we have to do something to provoke a massive response from Osama bin Laden 2.0, whoever that turns out to be. The immigration order is a pinprick, just something to test the waters. Think of it as market research. More will be coming.