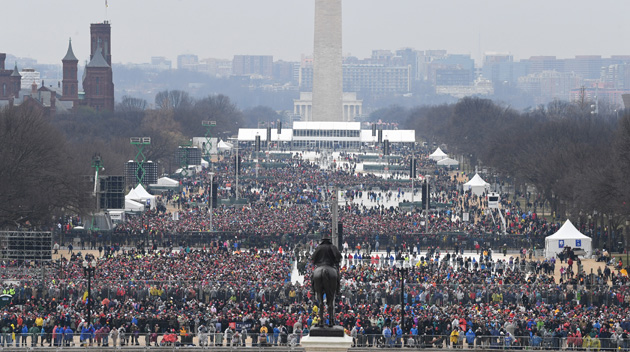 Watching the inauguration yesterday, I saw the smallish crowds just like everyone else. My immediate thought was: Oh God, this means tomorrow will be a 24/7 offensive from the White House about how this was the biggest inaugural crowd ever in history. The boy king will demand no less.

Sure enough, that’s what we got. Trump went out to visit the CIA today and informed everyone that the inauguration crowd was at least a million, maybe a million and a half. Then he sent out his press secretary, Sean Spicer, to deliver an unprecedented screed, yelling at the assembled reporters about how dishonest they were and then spewing out a whole array of fabricated numbers to back up his boss’s lies. When he was done, he turned on his heels and left without taking any questions.

I’m not interested in pointless discussions of whether Trump does this stuff to distract us (in this case, from the massive number of people at the women’s marches around the country). I suppose that’s part of it. But it’s obvious from decades of watching Trump that he simply can’t abide any criticism, either express or implied. Everything he does has to be the biggest and best. He’s incapable of not lashing out when anyone suggests otherwise.

That’s obvious enough to be banal at this point. What I’m more interested in is when the media is going to get over its faintheartedness and start calling this stuff what it is: lies. On CNN, Jim Sciutto reminded us that Trump frequently says things that “defy the facts.” On the web, CNN wrote about Spicer’s “misstatements of fact.” The New York Times said Trump’s crowd numbers were “false.” Other newspapers said the same thing in different ways.

But even by the strictest definition, Trump and Spicer were lying. Trump made up his numbers out of thin air, knowing perfectly well they were based on nothing. Spicer delivered a whole bunch of numbers that were obviously either invented or just plain fake—and did it in an angry tone that was clearly meant to intimidate everyone in the room.

All of this stuff was not just “false,” it was knowingly false. Everyone knows this. So let’s cut out the delicate language and the earnest panel discussions about whether Spicer might have a point about one thing or another. He was lying. Trump was lying. Can’t we be adults and just say so?

UPDATE: Jim Sciutto is CNN’s chief national security correspondent. He is not an MSNBC correspondent, as I originally wrote.