Why were Democrats so hellbent on stopping the confirmation of Betsy DeVos as Secretary of Education? Jonathan Chait reviews the possibilities today and points out that the federal government has a fairly small impact on education. This is true: 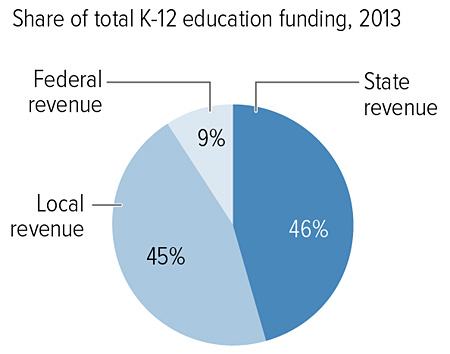 So if the Department of Education doesn’t have that much klout, why worry so much about DeVos? Here is Chait’s conclusion:

Her candidacy struck an authentic note of fear in the Democratic grassroots….DeVos frightened middle-class Democrats because she seemed to pose a threat to their children and their schools (a threat she is unlikely to carry out). Meanwhile, Price will be trying to snatch health insurance away from millions of Americans too poor or sick to buy it, Puzder will be grinding labor rights into dust, Sessions will be attacking voting rights and protections from police abuse for minorities, and Pruitt will be turning the EPA into a vassal of oil and coal interests.

Meanwhile, over on the right, it’s an article of faith that Democrats are puppets of the teachers unions, and that’s why they spent a lot of political capital opposing DeVos rather than other, far more dangerous characters.

I think this is all wrong. On a policy level, opposition to DeVos mostly centered on her devotion to vouchers and charter schools. But if DeVos had been defeated, Trump would simply have sent up another pro-voucher-pro-charter nominee. Defeating DeVos wouldn’t have changed anything.

The real reason Democrats spent so much energy on DeVos is pretty simple: she badly fluffed her Senate testimony, and came out looking like an idiot. Because of this, there was a realistic chance of finding three Republicans to join in opposing her, and thus defeating her nomination. In the end, only two Republicans stepped up, but for a while it looked like Democrats had a real chance at claiming a scalp.

This hasn’t been true of any of the others. There were never any Republicans who might have voted against Sessions or Pruitt or Price, and it’s hard to get the masses psyched up for battle when there’s really no chance of winning. That’s why, relatively speaking, Democrats haven’t mounted as big a campaign against any of Trump’s other nominees.

Depending on how Nannygate and a few other things turn out, it’s possible that Andy Puzder might also look vulnerable when his hearings start. If so, I expect that we’ll see a full-court press similar to what we saw with DeVos. The key variable here is not badness—Trump’s nominees are all bad from a liberal perspective—nor demonstrating loyalty to teachers unions—that’s just gravy—but the realistic possibility of defeating one of Trump’s nominees. That’s where most people want to spend their energy.