Donald Trump keeps saying that the murder rate is the highest it’s been in 45 years. This is wildly untrue, but other people are joining the bandwagon anyway. Jeff Sessions says the current rise in crime is a “dangerous permanent trend.” Talk show hosts agree. America is a dark and dangerous place, and it’s getting more dangerous all the time.

Aside from outright lies, a lot of this is based on cherry-picked statistics. The murder rate in Chicago has skyrocketed over the past three years. Los Angeles has seen a substantial rise in its violent crime rate. Etc. But if you’re interested in the whole picture, I have it for you below, complete and un-cherry-picked.

You’re all used to seeing long-term crime charts from me because I’m usually illustrating the effect of lead on crime over the past 50 or 60 years. Those charts show national crime rates plummeting in the 90s and early aughts. This time, though, the chatter is all about recent increases in murder and violent crime in big cities. For starters, then, here are the basic numbers for the past decade on violent crime in large cities from the National Crime Victimization Survey:1

The data goes through 2015,2 and shows that big-city violent crime did tick upward slightly in 2015. More generally, though, violent crime has displayed a noisy but steadily downward trend over the past decade. In 2015, violent crime in big cities was nearly a third lower than it was in 2007.

Next up is violent crime from the FBI’s Uniform Crime Reports. This is based on reports from police departments, and includes detailed data at the city level. Here are violent crime rates in America’s ten biggest cities3 through the first half of 2016:4 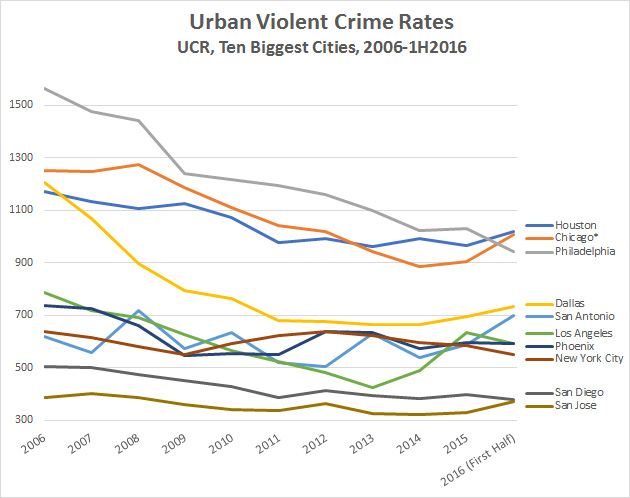 Some big cities have indeed shown worrying upward trends: Chicago, San Antonio, and Los Angeles are all up over the past two or three years. At the same time, Philadelphia, New York City, and San Diego are all down. More generally, except for San Antonio every single one of these cities has a lower violent crime rate than in 2006, ranging from 4 percent down (San Jose) to 40 percent down (Dallas and Philadelphia). The overall violent crime rate for all big cities is up over the past two years, but still lower than it was in 2006.

Finally, here are the murder rates in our ten biggest cities: 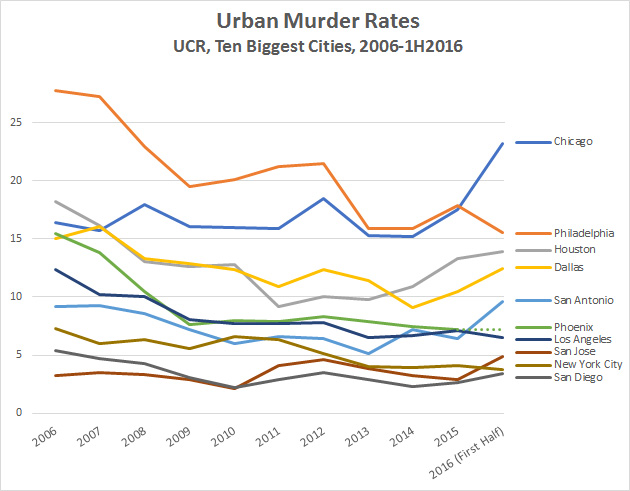 Chicago, obviously, is a big outlier, with a high and rising murder rate (up 53 percent over the past two years). The three biggest cities in Texas have also seen big recent increases. Philadelphia, Los Angeles, and New York City are down compared to 2015.

You can draw different conclusions from this data depending on what you look at.5 However, this is the best data we have. This is reality. Whatever you decide to say about violent crime, it needs to be based on this.

1The NCVS data on violent crime doesn’t include homicide because, obviously, you can’t call up people and ask if they’ve been murdered in the past year. Generally speaking, however, violent crime as a category includes murder, rape, robbery, and aggravated assault.

2Unlike the other charts in this post, this one starts in 2007 because the Bureau of Justice Statistics warns that a change in methodology in 2006 makes it difficult to compare 2006 to other years.

4I’ve annualized the rates for the first half of 2016 so they’re comparable to the other years.

5It’s worth mentioning that property crime is also down over the past decade. Ditto for crime in smaller cities and towns. I haven’t shown any of that here because big-city violent crime seems to be the topic of the moment. However, you might be interested in a little-known bit of crime trivia that will surprise most people: violent crime in big cities has fallen so much that it’s actually lower than anyplace else. The safest places in America are the biggest and smallest cities. It’s the medium-sized cities that now have the biggest violent crime problems.