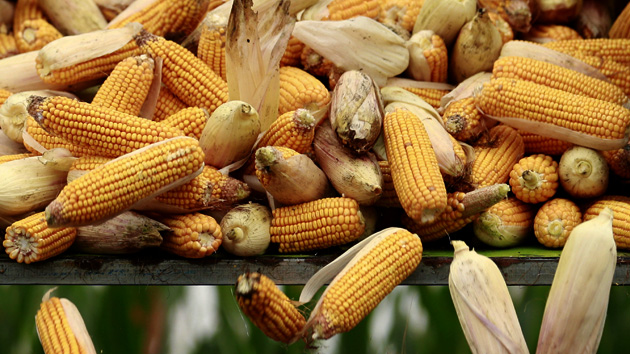 Mexico is threatening to use the power of corn to fight Donald Trump’s tough talk on trade:

As President Trump threatens Mexico with drastic changes on trade, its leaders are wielding corn as a weapon. Mexico’s Senate is considering legislation calling for a boycott of U.S. corn, and the government has begun negotiating with Argentina and Brazil to import corn from those nations tax-free. The threat of a boycott is Mexico’s latest and perhaps cleverest attempt to fight back against Trump, whose threats to pull out of free trade agreements and slap a 20% import tax on Mexican products have shaken confidence in Mexico’s economy.

The Trump administration is signaling to Congress it would seek mostly modest changes to the North American Free Trade Agreement in upcoming negotiations with Mexico and Canada, a deal President Donald Trump called a “disaster” during the campaign.

….The draft, reviewed by The Wall Street Journal, talks of seeking “to improve procedures to resolve disputes,” rather than eliminating the panels. The U.S. also wouldn’t use the Nafta negotiations to deal with disputes over foreign currency policies or to hit numerical targets for bilateral trade deficits, as some trade hawks have been urging.

….Jeffrey Schott, a trade scholar at the Peterson Institute for International Economics…noted that a number of the proposed negotiating objectives echo provisions in the Trans-Pacific Partnership, a 12-nation trade pact among Pacific Rim countries. Mr. Trump campaigned heavily against the TPP.

Do not underestimate the power of corn! Alternatively, maybe corn has nothing to do with it. Maybe Trump was just blathering all along and never really had any intention of getting tough with Mexico. In the end, he’ll build a few more miles of fencing, make a few modest changes to NAFTA, and then call it the greatest boon to the working man since the Wagner Act. I’ve also read a few pieces recently about China, and apparently all those Goldman Sachs folks Trump hired have talked him into backing down on a trade war there too. I guess Goldman Sachs has to be good for something.

Anyway, having given up on Mexico and China, now Trump is going after the ultra-conservatives of the House Freedom Caucus:

The Freedom Caucus will hurt the entire Republican agenda if they don’t get on the team, & fast. We must fight them, & Dems, in 2018!

I’ll bet they’re scared shitless. Trump is demonstrating that his talk may be big, but he can’t make it stick. In his first two months, he’s failed on his immigration order and his health care plan, has no chance of building his wall, and has backed down on Mexico and China. His bark is unquestionably worse than his bite.

The health care bill would have flamed out in the Senate anyway. The HFC did everyone a favor by getting it off the agenda quickly so Congress could move on to more important matters like cutting taxes for the rich.