Republicans like to say they want to “reform” Medicaid because it’s so terrible for poor people. “More and more doctors just don’t take Medicaid,” Paul Ryan claimed when he unveiled his health care bill. Jordan Weissmann isn’t buying it:

It is true that many doctors do not accept new Medicaid patients, in large part because the program pays physicians relatively little for their services. But new data suggests Ryan is dead wrong when he says this is a growing problem. If anything, it appears that more doctors have started to see Medicaid enrollees in the years since the program expanded under the Affordable Care Act….According to the doctor job placement company Merritt Hawkins, 53 percent of physicians in 15 large cities said they were accepting Medicaid patients in 2017. That’s up from 45.7 percent in 2014, when the Medicaid expansion began, and down slightly from 2009, when it was 55 percent.

This is all true, but it’s worth taking a look at the whole picture. Here’s the Merritt Hawkins data since 2004 for Medicaid and since 2014 for Medicare: 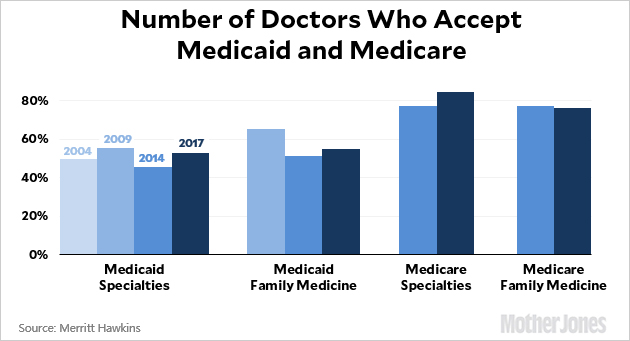 Among specialties, the number of doctors taking new Medicaid patients has stayed about the same since 2004. However, in family medicine, it’s gone down by about ten points. And in both cases, the numbers hover around 55 percent, far lower than Medicare’s 80 percent.

It’s also worth taking a look at the enormous differences from city to city: 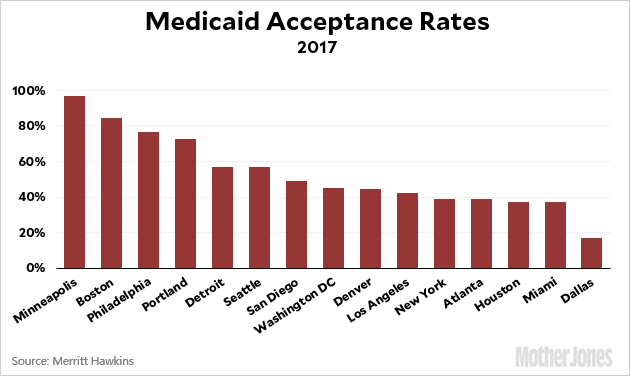 Generally speaking, Weissmann is right that doctor acceptance of Medicaid doesn’t appear to be a worsening problem. He’s also right about Republican crocodile tears: if they want to improve acceptance rates, they need to pay doctors more, not cut funding for Medicaid under the guise of reform. And he’s right that Medicaid isn’t too different from cheap private plans that significantly restrict doctor choice.

At the same time, Medicaid definitely has its problems. Only about half of doctors accept it, and what’s worse, this varies dramatically between cities. If you live in Minneapolis or Philadelphia, you’re probably OK. But if you live in New York or anywhere in the South, good luck finding a doctor who’s nearby and doesn’t have huge wait times.

We accept this as a nation because, hey, it’s just welfare for poor people and they should be grateful for what we give them. And for the most part, they are: people on Medicaid generally give it good marks because it’s simple, free, and way better than not having any coverage at all. But the way we treat it is still pretty shameful. The day can’t come soon enough when Medicaid, Medicare, and private coverage are finally all merged into a single national system and everyone is guaranteed decent care.