This post is longish and doesn’t really have much payoff at the end. It’s just something that turned into a bit of snark hunt, so I figured I’d document it. You have been warned.

It starts with a column by Mona Chalabi, the Guardian’s “data editor,” which claims to outline her research on the question of whether illegal immigrants commit more crimes than native-born Americans. It’s faintly ridiculous and I’m a little annoyed by it, but then I come to this:

I find a study by Bianca E Bersani. I look her up — she’s a associate professor of sociology at the University of Massachusetts, Boston. Using numbers from the Bureau of Labor Statistics, her study finds that about 17% of all first-generation immigrants who are age 16 have committed a crime in the past 12 months….But wait. Is that number high or low? I decide to find out how often native-born people in the US commit crimes. Luckily, her study has that too. It’s higher: about 25% of all native-born people in the US who are 16 have committed a crime in the past 12 months.

That seems kind of high, doesn’t it? Then again, “committed a crime” could encompass things like smoking a joint or stealing a box of paper clips from school, so who knows? The data comes from a paper called “A Game of Catch-Up? The Offending Experience of Second-Generation Immigrants,” so I check it out. But there’s nothing there. The paper has nothing whatsoever to say about either 16-year-olds or first-generation immigrants. What’s going on? Here’s the chart Chalabi presents: 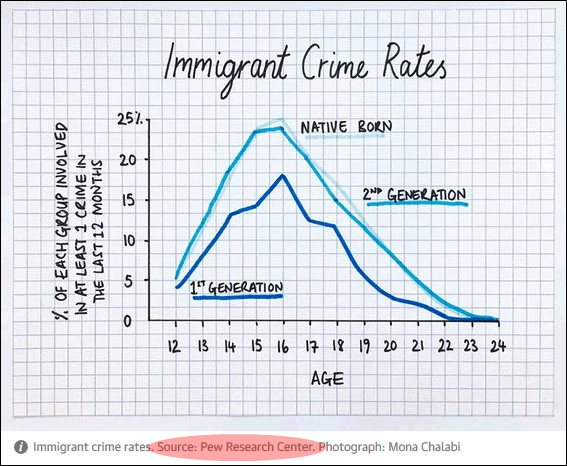 This is a little odd. It suggests that 25 percent of 16-year-olds have committed a crime in the past year, but only 20% of 17-year-olds. That doesn’t jibe with what I know about crime rates. And the source is Pew Research. So let’s go look at the Pew article. It’s a lengthy description of Bersani’s article, and it includes this chart: 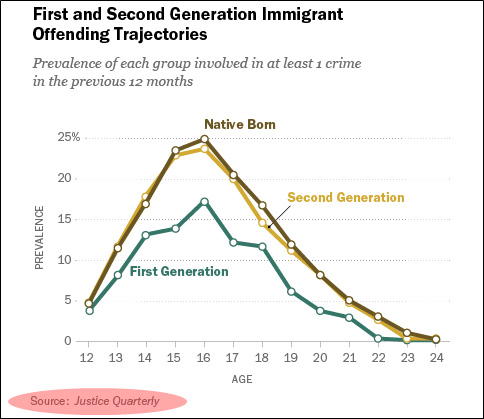 This is odd again. It’s the same chart, all right, and the author spends a lot of time describing “A Game of Catch-Up?” But as I mentioned above, that article contains nothing like this at all. What’s more, it appeared in Crime and Delinquency, but the chart is sourced to Justice Quarterly.

So now it’s off to Justice Quarterly. It turns out that everyone is describing the wrong article. I wonder if any of them actually read it? The correct article is “An Examination of First and Second Generation Immigrant Offending Trajectories,” also by Bianca Bersani. Fine. What does that article say? Here is Bersani’s chart, colorized for your viewing enjoyment: 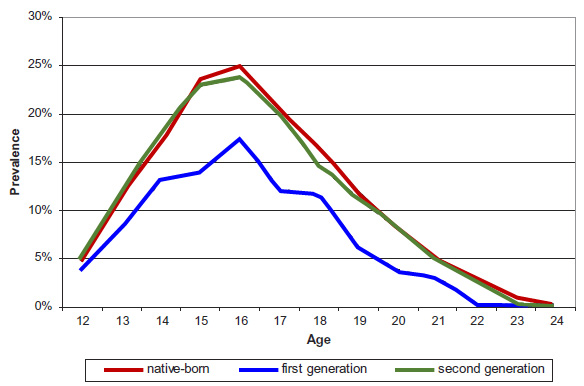 It appears that everyone has been copying the chart properly. For what it’s worth, though, I’d make a few comments:

I’d add that Bersani didn’t just add up all the crimes committed by various groups. Her methodology is pretty impenetrable to anyone who’s not an expert:

where ln(kjit) is the natural logarithm of the number of total crimes for persons i in group j at each age t. The equation specified above follows a quadratic function of age (age and age2)….

I have no idea what this means or whether it’s appropriate, but I’m a little skeptical about a model that suggests that 17- and 18-year-olds commit crimes at lower rates than 16-year-olds. Most crime data I’ve seen shows the opposite. Then again, most crime data doesn’t include extremely minor crimes like shoplifting and property destruction. It’s possible that adolescents age out of that stuff pretty early.

Long story short, I wouldn’t draw too many conclusions from this study. The data is old; it’s not limited to illegal immigrants; it looks only at adolescents; the crimes under consideration are pretty minor; and the methodology is probably OK, but who knows? Put it all together, and I’d say it doesn’t tell us too much one way or the other about the serious crime rate of illegal immigrants as a whole.

I have yet to see a study that persuasively suggests a higher crime rate for immigrants than for anyone else. Let’s face it: if there’s anything we native-born Americans excel at, it’s crime. That said, the Guardian’s data editor should have known better. There are tons of studies out there that try to estimate the relative crime rates of native-born Americans compared to undocumented immigrants, and cherry picking this particular one makes no sense. It does provide a rough data point suggesting that crime rates of immigrants aren’t any different from the rest of the population, but it’s nowhere near the best study out there. Citing this one and calling it a day is a real disservice.