Ross Douthat raised a common conservative talking point in his column this weekend:

It’s worth raising once again the most counterintuitive and frequently scoffed-at point that conservatives have made about Obamacare:

It probably isn’t saving many lives.

One of the most powerful arguments in the litany that turned moderate Republican lawmakers to jelly was that they were voting to “make America sick again,” to effectively kill people who relied on the Affordable Care Act for drugs and surgery and treatment….So far the evidence is conspicuously missing.

The words probably and many are doing a heavy lift here, but let’s set that aside. Douthat is almost certainly right. Here’s why: 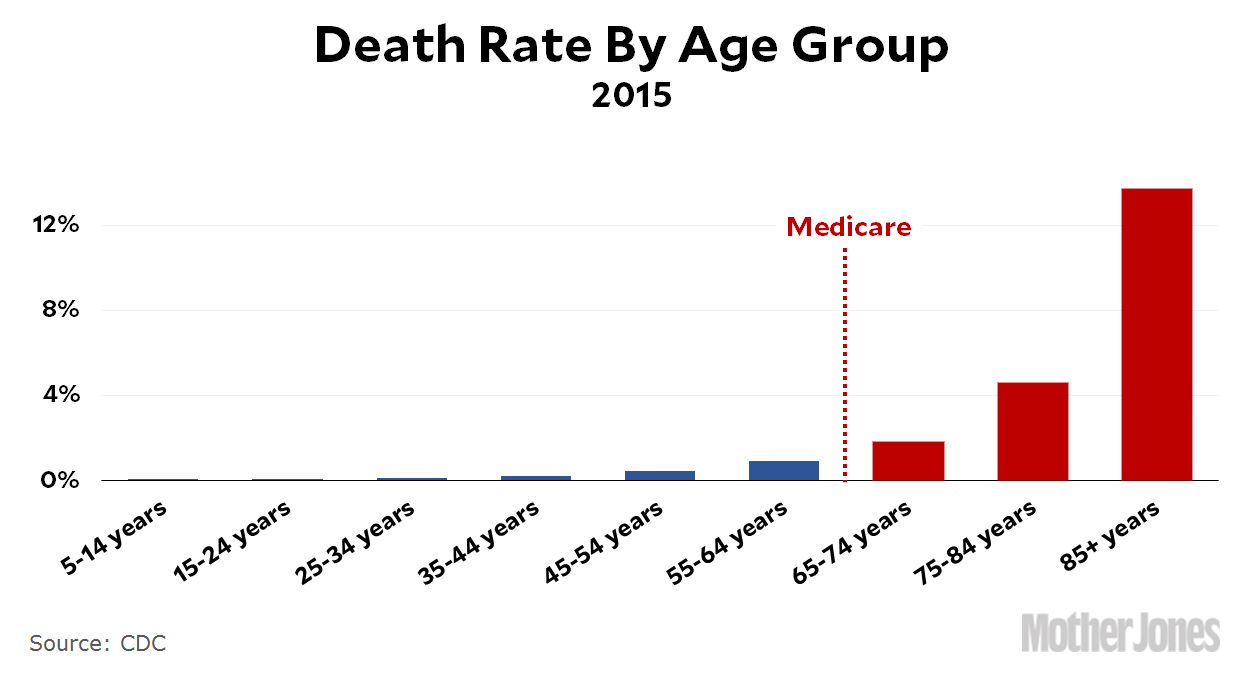 People in the US don’t die much before age 65, so health insurance for working-age folks has never been likely to have much effect on death rates.1 Below age 55, it’s even less likely: the death rate is so minuscule that it would take a miracle to invent any kind of health-related practice that had a measurable effect on life expectancy. If the crude death rate is already below 0.5 percent, there’s just no way to reduce it much more.

And yet, people like health care anyway. They like it so much that we’re collectively willing to spend vast amounts of money on it. As you’ve probably heard many dozens of times, health care is one-sixth of the economy. On average, that means we all pay about one-sixth of our income to provide health care for ourselves.

Why? At the risk of repeating the obvious, most medical care isn’t about lifespan. Before age 65, almost none of it is about lifespan. It’s about feeling better. I’m taking a very expensive chemotherapy drug that probably won’t delay my eventual death by much, but it will improve my life considerably in the meantime. Ditto for the antidepressant I take. And for the arthroscopic knee surgery I had a couple of decades ago.

The same is true for putting a leg in a cast; prescribing an asthma inhaler; replacing a hip; treating an infection; inserting an IUD; treating a hernia; removing a cataract; prescribing a statin; or a hundred other medical procedures. Only a small percentage of what doctors do is lifesaving.

It’s a measure of our impoverished sense of empathy that we spend so much time focused on whether health care saves lives. Liberals do it because it’s the only thing guaranteed to get a positive reaction. Even stone conservatives don’t want people dying in the streets. If progressives focused instead on the fact that health coverage saves money and makes you feel better, there’s a good chance that support for wider health coverage would suffer substantially. To an awful lot of people, just making others “feel better” doesn’t seem worth paying taxes for.

1The big exception is dying at birth or during the first year of life. The United States has an appallingly poor record on that score, especially among the poor and non-white.