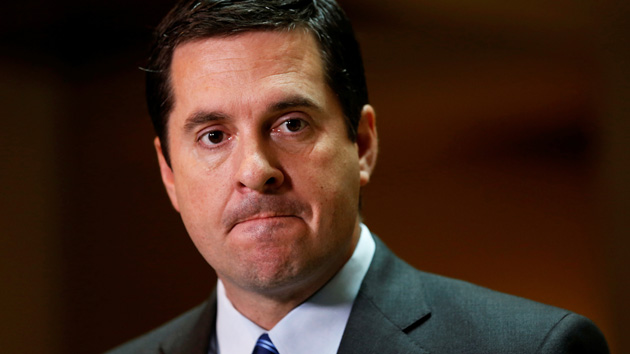 One of those involved in procuring the documents cited by Nunes has close ties to former national security adviser Michael Flynn. The official, Ezra Cohen, survived a recent attempt to oust him from his White House job by appealing to Trump advisers Jared Kushner and Stephen K. Bannon, the officials said….After assembling reports that showed that Trump campaign officials were mentioned or inadvertently monitored by U.S. spy agencies targeting foreign individuals, Cohen took the matter to the top lawyer for the National Security Council, John Eisenberg.

The third White House official involved was identified as Michael Ellis, a lawyer who previously worked with Nunes on the House Intelligence Committee but joined the Trump administration as an attorney who reports to Eisenberg.

This is an amazingly far-reaching conspiracy considering that the documents don’t actually seem to have contained anything very interesting. You’d think that at some point one of these guys would have the common sense to call off this Keystone Cops affair.

And as long as we’ve mentioned Michael Flynn, here’s the latest on him:

Michael T. Flynn, the former national security adviser, has offered to be interviewed by House and Senate investigators who are examining the Trump campaign’s ties to Russia in exchange for immunity from prosecution, according to his lawyer and a congressional official.

I didn’t bother mentioning this yesterday because, frankly, I sort of figured that Flynn was hoping for immunity and then wouldn’t say anything very interesting. Last night Josh Marshall opined that “you only get immunity if you deliver someone else higher up the ladder,” but this morning he seems to have changed his mind:

Flynn’s lawyer states rather grandly that his client “has a story to tell and … very much wants to tell it.” But Alex Whiting of Harvard Law School argues pretty convincingly that what we learned last night likely means either that Flynn doesn’t have a story prosecutors are willing to barter for or isn’t yet willing to tell it.

So probably Flynn doesn’t have much to say after all. Which gets us back to the clowns in the White House. What were they doing trawling through highly classified reports anyway? Barton Gellman says this is the key unanswered question so far, and it’s related to the allegation that some of the names in the reports had been unmasked, something that happens only if a “customer” asks for it:

If Nunes saw reports that named Trump or his associates, as he said, the initiative for naming names did not come from the originating intelligence agency. That is not how the process works. The names could only have been unmasked if the customers—who seem in this case to have been Trump’s White House appointees—made that request themselves. If anyone breached the president’s privacy, the perpetrators were working down the hall from him. (Okay, probably in the Eisenhower Executive Office Building next door.) It is of course hypocritical, even deceptive, for Nunes to lay that blame at the feet of intelligence officials, but that is not the central concern either.

If events took place as just described, then what exactly were Trump’s appointees doing? I am not talking only about the political chore of ginning up (ostensible) support for the president’s baseless claims about illegal surveillance by President Obama. I mean this: why would a White House lawyer and the top White House intelligence adviser be requesting copies of these surveillance reports in the first place? Why would they go on to ask that the names be unmasked? There is no chance that the FBI would brief them about the substance or progress of its investigation into the Trump campaign’s connections to the Russian government. Were the president’s men using the surveillance assets of the U.S. government to track the FBI investigation from the outside?

That reference at the end to “the president’s men” is no coincidence. This whole thing looks more Watergate-ish by the day. Maybe it’s time to start calling it Russiagate.