The Wall Street Journal has a story today titled “The Rising Retirement Perils of 401(k) ‘Leakage.’” This refers to people taking out loans from their 401(k) plans or cashing them out when they leave a job. I have two comments.

First, it’s not clear to me that the Journal’s own evidence supports the idea of some kind of retirement “peril.” Here are the three charts they present: 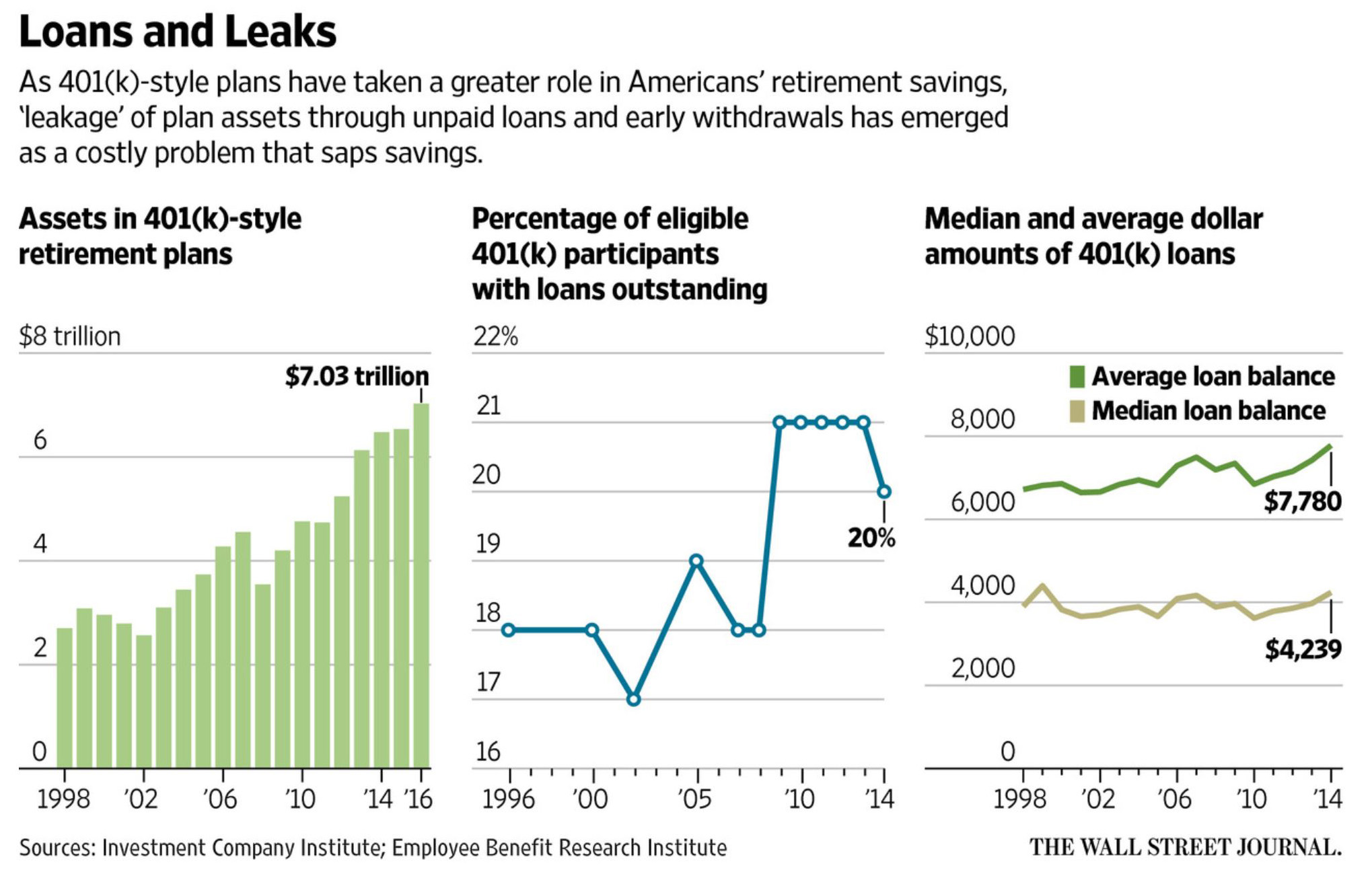 Chart #1 shows a steady increase in 401(k) assets over the past decade. That’s good news.

Chart #2 shows a smallish increase (18 percent to 21 percent) in the number of people who took out loans from their 401(k) accounts in 2009-13. This was the depths of the Great Recession, and it’s hardly surprising news. By 2014 the number was already going back down.

Chart #3 shows the average size of 401(k) loans. Median is what we care about, and it shows no change at all. It’s been hovering around $4,000 for the past two decades.

None of this strikes me as especially nerve-wracking. I just don’t see any big crisis here.

But that brings me to my second comment. One of the paradoxes of retirement is how much control people should have over their own accounts. On one end you have personal savings, which you can do anything with. On the other end you have Social Security, which you can’t do anything with. You pay in via mandatory payroll taxes, and when you retire you get a guaranteed monthly payment. Period.

401(k) accounts are in the middle. You don’t have to pay in, but everyone is encouraged to. And there are rules about how much you can withdraw during your working years, but those rules are flexible.

Conservatives mostly take the opposite approach. But again, if you provide lots of flexibility, why bother with 401(k) accounts at all? Just let people save on their own. The tax deferment of 401(k) accounts isn’t all that great anyway.

This explains my own sentiment toward 401(k) accounts. I happen to believe in two things. First, the federal government should guarantee a minimum safety-net retirement for everyone. I’d like it to be more generous for the bottom third, but roughly speaking I think Social Security fits the bill pretty well.

Second, although encouraging workers to save more for retirement is admirable—and human nature being what it is, a bit of benign paternalism is probably a good idea here—people ought to have some control over what happens to their money. They know their own situation best, after all. If they have medical bills or college tuition bills, they might very well conclude that spending money now is more important than a more comfortable retirement. Once they’re retired, they might prefer a large lump sum—maybe to buy a house or an RV or something like that—rather than a monthly payout. A 401(k) account allows this kind of thing within limits, and I like that. True, some people will do foolish things, but that’s life. That’s why we have Social Security.

Our retirement system is fairly accidental and jury-rigged, but I think it’s turned out pretty well. Social Security provides a basic safety net, while 401(k) accounts provide an incentive to save more but allow more flexibility than Social Security. It’s a good combination, and it’s getting better as new rules bring more and more people into the 401(k) universe. There are modest changes I’d make to both pieces of this retirement package, but on the whole I think it works pretty well.