James Pethokoukis has a pair of posts up today that reignite a longstanding question: What’s the right way to measure inflation? And what does that mean about earnings and income mobility over time?

These are both complicated questions, but we can start with a very simple chart. If we want to compare, say, 30-year-old men to their fathers, and their fathers to their fathers, we can do it pretty easily. The Census Bureau collects data on median cash earnings (i.e., not counting health care, employment perks, or government benefits) and then all we have to do is adjust for inflation. But which measure of inflation? 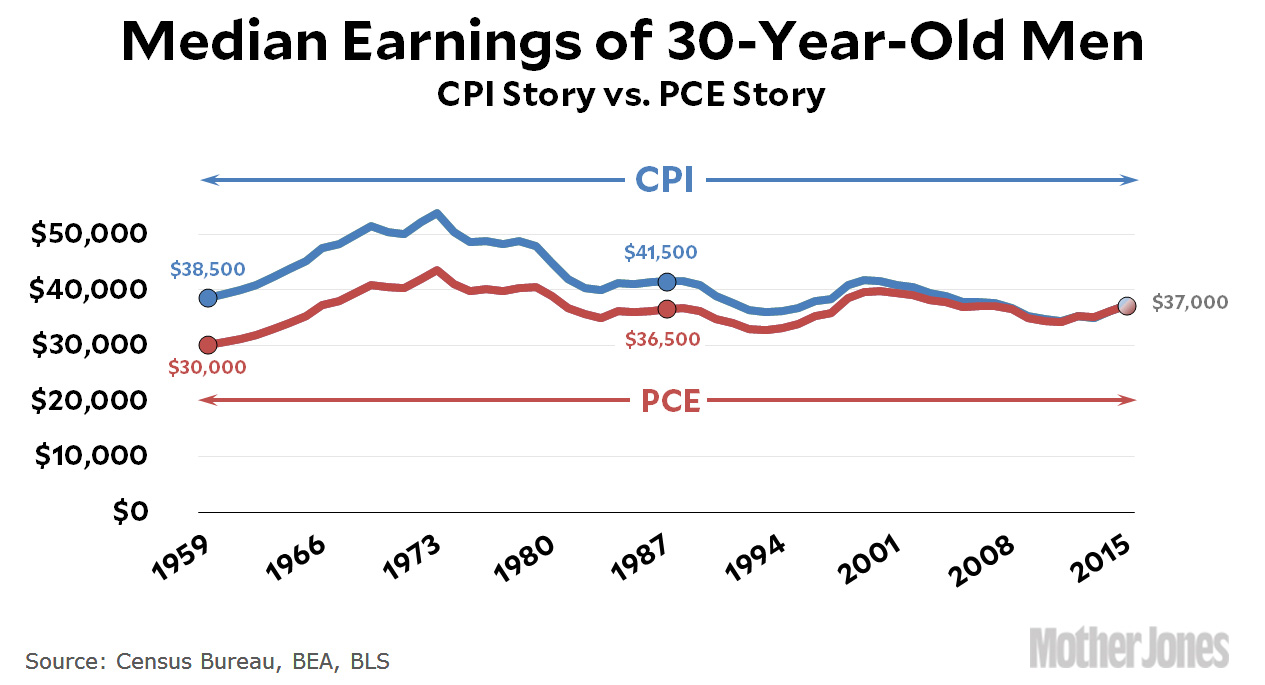 The PCE story is different. In the previous generation, young men earned 22 percent more than their fathers. That’s pretty good. In the current generation, millennial men earn about the same amount as their fathers. Stagnation like that is bad news, but at least millennials aren’t literally losing ground.

So which should we believe? There are arguments for both, and it’s a political hot potato too since inflation measures show up in all sorts of benefit calculations. It would be nice if the economic community could thrash out agreement on an overall best measure, and then make it available as a standard series going back 70 years, but if it turns out that the new measure leads to (for example) lower cost-of-living adjustments for Social Security benefits, you can expect a massive pushback. Republicans have shown a particularly aggressive form of this kind of political hackery in the past, approving of new inflation measures that would decrease benefits, but opposing the same measures if they meant that people might pay higher taxes.

All that conceded, we really should be able to agree on a good, general-purpose inflation measure. We can still have lots of different measures for specialized purposes, but the headline inflation rate should be something that, say, 90 percent of economists can agree about. (There will always be a few outliers.)

For more on this, Pethokoukis points us, first, to a new study by Bruce Sacerdote, which suggests that consumption has increased substantially over the past several decades, once you adjust for inflation bias and include the growth of government benefits. On a less happy note, he also points us to a study by Scott Winship about income mobility. Winship concludes that although there’s still a fair amount of income mobility within the broad middle class, there’s very little at either end. Poor kids stay poor, and rich kids stay rich.