By now we all know the story of President Trump’s sudden U-turn on NAFTA earlier this week. But just to refresh your memories, here is the Washington Post:

“I was all set to terminate,” Trump said in an Oval Office interview Thursday night. “I looked forward to terminating. I was going to do it.”…At one point, he turned to Kushner, who was standing near his desk, and asked, “Was I ready to terminate NAFTA?”

“Yeah,” Kushner said, before explaining the case he made to the president: “I said, ‘Look, there’s plusses and minuses to doing it,’ and either way he would have ended up in a good place.”

The basic story here is that Trump is a child. He was all ready to pull the trigger, but then his advisors brought in a colorful map showing that lots of red states and counties would be harmed by pulling out of NAFTA. Eventually Trump calmed down and normalcy reigned for another day. 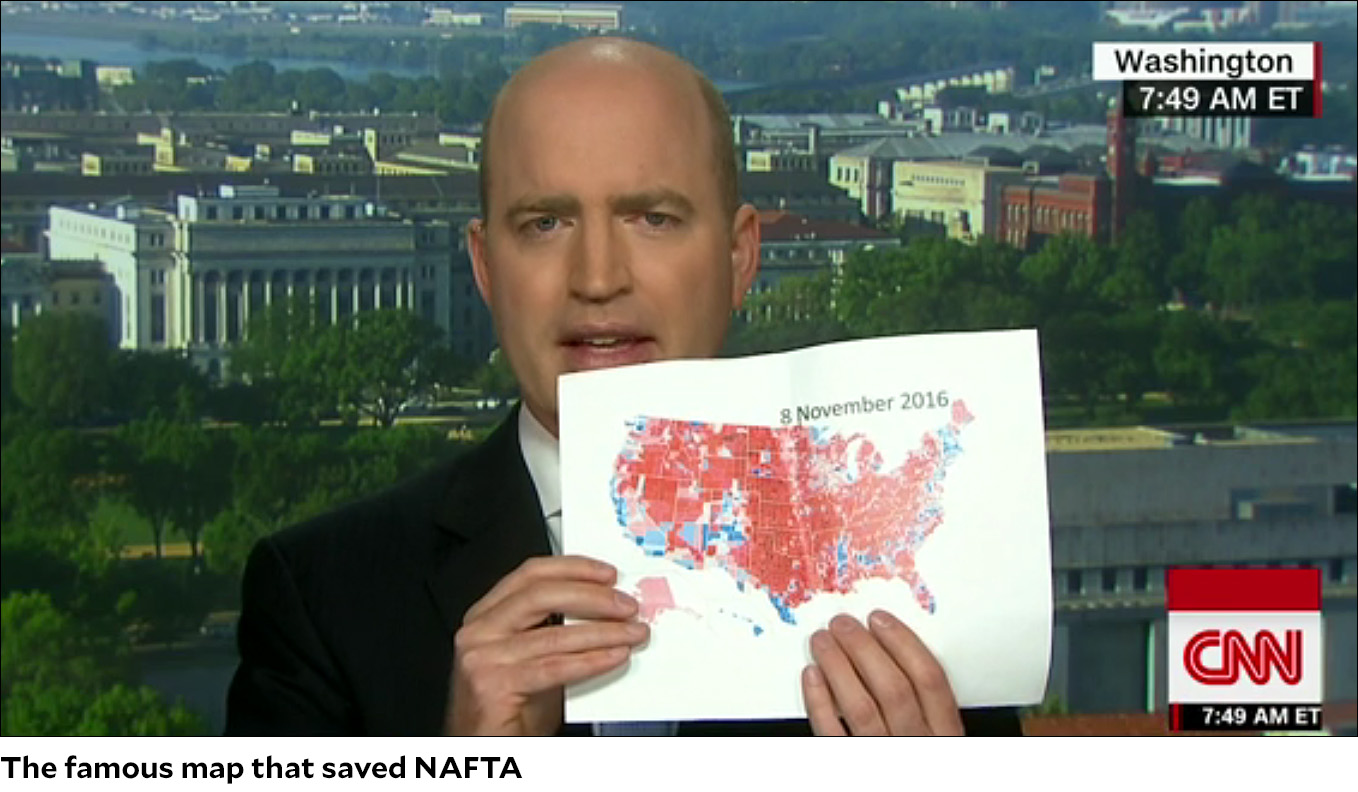 But here’s the part of the story I still don’t understand: what happened on Wednesday that suddenly put a burr up Trump’s ass to pull out of NAFTA? Just a few weeks ago he sent a list of negotiating points to Congress, and both Mexico and Canada have agreed the treaty needs some updating. Things were moving along fairly normally, and then suddenly Trump woke up one morning and decided to light off a nuclear bomb.

What was that all about? Was it really because of Trump’s obsession over having some kind of accomplishment to show for his first hundred days? Did he eat a taco that didn’t agree with him? Did Steve Bannon have a late-night talk with him?

This was the reason all along that Trump was a far more dangerous candidate than Ted Cruz or Marco Rubio. From a liberal point of view, his incompetence was a bonus that might restrict the short-term damage he could do. But Trump also brought to the table a noxious racist appeal, an ugly nationalism, an appalling level of ignorance, and a mercurial temperament. All of these were on display Wednesday. Apparently out of nowhere, and for no particular reason, he just strolled into the Oval Office and decided he wanted to formally withdraw from NAFTA.

Why? And what are the odds he’s going to do this again on something more important? Something that, for whatever reason, his aides can’t talk him out of with a colorful map and another diet Coke?

I’m not sure everyone realizes that this is the most dangerous thing Trump has done so far. It was a close-run thing, but next time it might not be. And we still have 1,361 days left to go of Trump’s presidency.