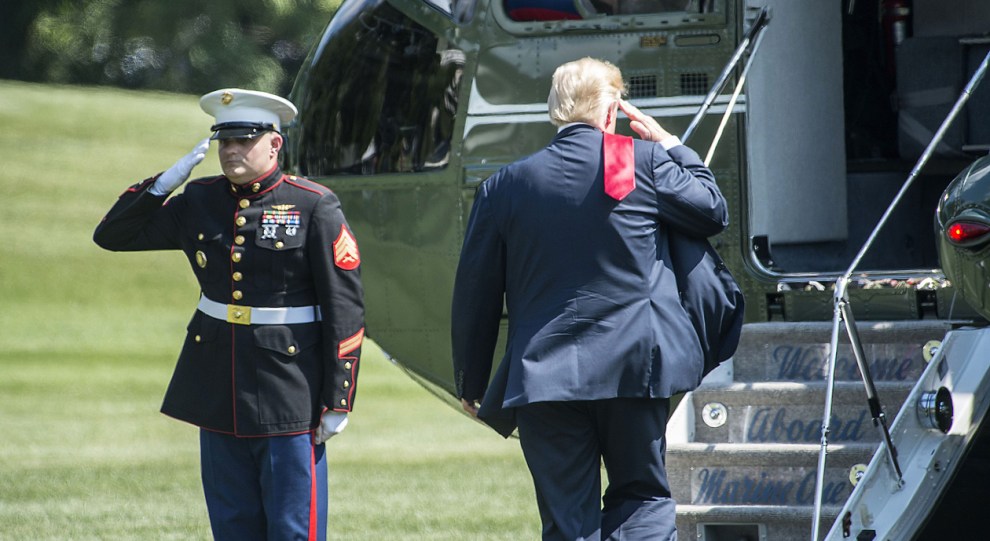 The New York Times writes today that presidents have been lying for a long time:

One of the first modern presidents to wrestle publicly with a lie was Dwight D. Eisenhower in May 1960, when an American U-2 spy plane was shot down while in Soviet airspace. The Eisenhower administration lied to the public about the plane and its mission, claiming it was a weather aircraft…In 1972, at the height of the Watergate scandal, President Richard M. Nixon was accused of lying, obstructing justice and misusing the Internal Revenue Service…President Clinton was impeached for perjury and obstruction in trying to cover up his affair with an intern, Monica Lewinsky, during legal proceedings.

Ah, those were the good old days. Presidents lied infrequently, but when they did, they told real whoppers. And those whoppers were designed to cover up serious misdeeds.

This is what makes Donald Trump so different. He tells lies constantly, but his lies are mostly trivial. It’s easy to understand why Nixon or Clinton lied, regardless of whether we approve. But it’s not so easy to understand the point of Trump’s torrent of fibs. Can he not help himself? Does he genuinely not understand what he’s doing? Is he unable to deal with the possibility that he isn’t the greatest human being in the history of the planet? It’s a mystery.

One way or the other, he sure is one weird dude. My guess is that he’s also not entirely in control of his faculties anymore. Here is Robin Wright in The New Yorker:

Why Is Donald Trump Still So Horribly Witless About the World?

“Trump has an appalling ignorance of the current world, of history, of previous American engagement, of what former Presidents thought and did,” Geoffrey Kemp, who worked at the Pentagon during the Ford Administration and at the National Security Council during the Reagan Administration, reflected. “He has an almost studious rejection of the type of in-depth knowledge that virtually all of his predecessors eventually gained or had views on.”

…“The sheer scale of his lack of knowledge is what has astounded me—and I had low expectations to begin with,” David Gordon, the director of the State Department’s policy-planning staff under Condoleezza Rice, during the Bush Administration, told me.

This is decidedly not normal. Most people, even if they were abysmally ignorant, would learn some things over the course of two years of campaigning and being president. Even if, like Trump, they declined to read anything, they’d pick up stuff by osmosis. There’s a helluva lot of expert conversation that surrounds people like Trump, and you can hardly help but learn from it unless you’re actively trying to block it out.

Apparently that’s what Trump does. It’s not just that he’s galactically ignorant, it’s that he actively works to stay that way. What kind of person is so afraid of facts and knowledge that he actually spends emotional energy to prevent learning anything, even if that learning is essentially free?

Alternatively, Trump is no longer completely in control of his faculties and simply forgets stuff almost as soon as he hears it. My guess is that it’s some of both.