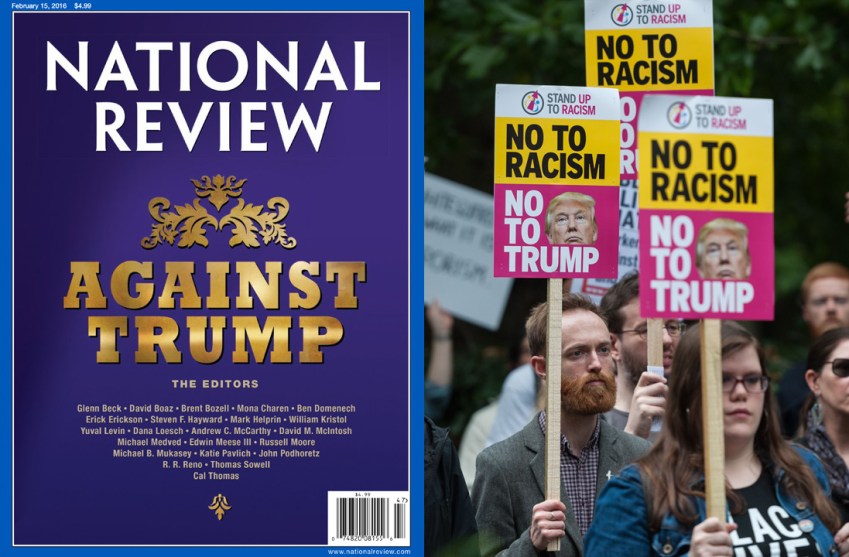 Protesters by Rex Shutterstock via ZUMA

Last night National Review posted an editorial calling on President Trump to be more forthright in his denunciation of the neo-Nazi violence in Charlottesville: “It is important that he…call this what it is: an act of terrorism conducted under the auspices of a white-supremacist movement that has embraced terrorism and political violence.” That’s fine. But then they added this:

This is somewhat awkward for President Trump because the cracked and malevolent young men raging about “white genocide” are his people, whether he wants them or not. Let us be clear about what we mean by that: President Trump obviously has defects and shortcomings as a political leader, but we do not believe for a second that those failures include a sneaking anti-Semitism or a secret taste for neo-Confederate revanchism. At the same time, he has made common cause with those who have flirted with those elements for political and financial gain.

In January of last year, during the Republican primary race, NR famously headlined an entire issue “Against Trump.” But it was a funny thing. The lead editorial laid out all sorts of reasons Trump was unfit for office, but neither his racism nor his tolerance for racism were among them. The issue also included short pieces from 22 well-known conservatives who opposed Trump. Of these 22, only one, libertarian David Boaz, explicitly called out Trump’s racism (“Not since George Wallace has there been a presidential candidate who made racial and religious scapegoating so central to his campaign”).¹

Since then, we’ve seen Trump repeatedly refuse to condemn David Duke. We’ve watched as he hired Steve “we’re the platform for the alt right” Bannon and then installed him in the West Wing. We listened to him attack a federal judge as unfair because “he’s a Mexican.” And now we’ve all sat agog for two days wondering if he would ever explicitly denounce neo-Nazis and the KKK. Neo-Nazis! And of course, this is all on top of everything Trump had done before last January—things that were obvious enough for David Boaz to note, even if no one else did.

What, exactly, does it take for conservatives to do more than delicately suggest that Trump has “made common cause with those who have flirted” with racism? What does it take to convince them that Trump is, simply, racist? Or, at the very least, is cheerfully enthusiastic about using racial appeals as a core political tool? What does it take?

¹Michael Medved also mentioned the “uncomfortable, unavoidable issue of racism,” but only to note that it gave Democrats a pretext to smear Republicans, and anyway, it wouldn’t do any good since Republicans could hardly win any more of the white vote than they already did.