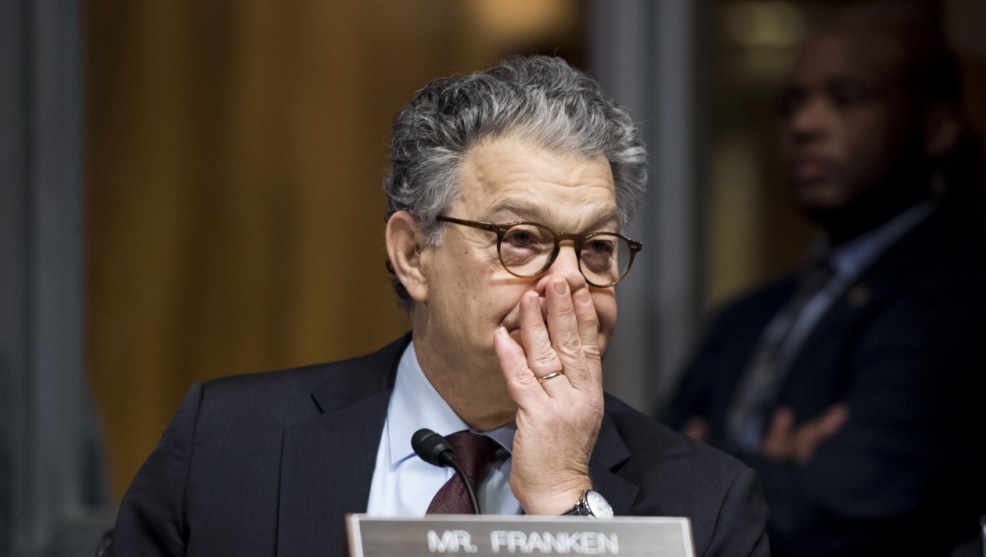 Another woman has accused Sen. Al Franken of inappropriate behavior. She is anonymous, and says that when she was on Franken’s radio show in 2006 he reached over to kiss her, saying, “It’s my right as an entertainer.” Two colleagues independently verified her account.

And with that the dam has broken. Franken categorically denied the story, but nearly a dozen Democratic woman in the Senate have called on Franken to resign. DNC chair Tom Perez has called on him to resign. And several male senators have joined the crowd. It’s finally starting to look unlikely that he can survive.

I continue to be muddled about this. There are now half a dozen women who have made very similar accusations against Franken. Obviously that’s meaningful. At the same time, the first accusation came from radio host Leeann Tweeden, and Franken says the events she describes happened very differently. Tweeden accepted Franken’s apology, but then further accusations came from anonymous women who say Franken grabbed their butts at photo ops. And now there’s this.

But something still doesn’t feel right. Some of the accusations are about things that can morph from jokes into harassment with just the slightest change in emphasis. Some of the accusations are too similar, almost as if they’re being cribbed from each other. Franken was not in a position of authority over any of the women, which is usually a part of the abuse syndrome. What’s more, none of this behavior squares with Franken’s behavior toward the women he’s worked with, and there hasn’t been so much as a peep from anyone saying that “everyone knew,” which is also pretty common when these accusations come to light.

I don’t know. It looks like Franken is going to be forced out of the Senate, and I’m not happy about that. Maybe he’s a serial groper who deserves to be shunned, but I’m still not convinced. There’s something not quite right about all this.

UPDATE: I’ve changed a few bits in this post to make my point a little sharper and remove some things that might be construed as belittling.

UPDATE 2: There’s now another accusation of groping against Franken. This one is from Tina Dupuy, a progressive writer and former Democratic staffer:

Tweeden’s story rang true to me. I’d told myself I was the only one. I’d been groped by Franken in 2009.

It happened at a Media Matters party during the first Obama inauguration….I asked to get a picture with him. We posed for the shot. He immediately put his hand on my waist, grabbing a handful of flesh. I froze. Then he squeezed. At least twice….Al Franken’s familiarity was inappropriate and unwanted. It was also quick; he knew exactly what he was doing.

Apparently Franken plans to make an announcement tomorrow. The consensus, obviously, is that he’s going to announce his resignation.