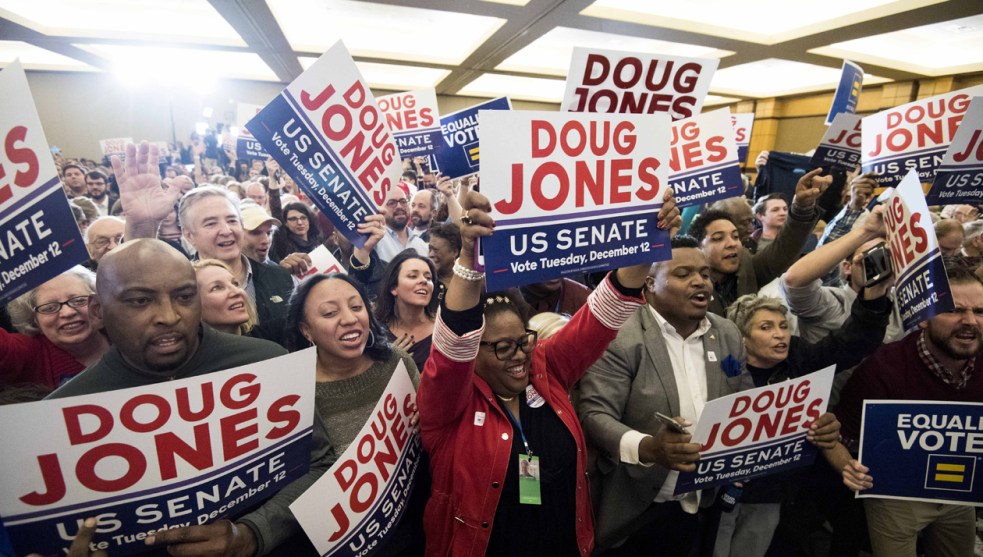 Over the weekend, the New York Times wrote yet again that “extraordinary turnout among black voters” pushed Doug Jones to victory over Roy Moore in the recent race for Alabama’s open Senate seat:

That turnout, in which registered black voters appeared to cast ballots at a higher rate than white ones, has become the most recent reference point in the complicated picture about race and elections laws….Exit polls are preliminary, but the ones available in Alabama suggest the share of blacks who cast ballots — roughly 41 percent of the African-Americans voters — exceeding the 35 or so percent of whites who turned out. The divide likely reflects a robust black turnout and modest participation from whites who were unenthusiastic about Mr. Moore, whose already-controversial candidacy was dogged by accusations of sexual misconduct.

I don’t want to get obsessed by this, but I continue to wonder where this meme is coming from. It’s hard to put the 2017 race into any kind of context since exit polls usually aren’t available for Alabama, but they are available for some years. So after dredging up all the relevant data, here’s what I came up with for turnout rates in 2008 and 2017:

Compared to 2017, absolute turnout was higher across the board in 2008 since it was a presidential race. But it also had higher relative black turnout. In 2008, black turnout was 13 percent higher than white turnout. In 2017 it was only 8 percent higher. Since my turnout rate for blacks in 2017 is different from the Times calculation of 41 percent, I figure I should show my work:

Now, in 2008 Barack Obama was on the ballot and you’d expect black turnout to be especially high. So even if black turnout in 2017 wasn’t better than 2008, maybe it’s remarkable that black turnout was almost as good.

That could be. If we had other midterm elections to look at, we’d have a better idea of what black vs. white turnout rates normally look like in Alabama.¹ But as far as I know, we don’t. That means there’s no real basis for saying black turnout was extraordinary in 2017, and at least some basis for saying it wasn’t. If anyone has some kind of reliable turnout data by race in Alabama midterm elections, that might change the story. But unless we get that, there’s just no evidence that black turnout was unusually strong when Doug Jones won on December 12.

Or maybe I’m just missing something. But what?

¹If I had to guess, I’d say that black turnout in Alabama Senate races is usually lower than 29 percent because everyone know who’s going to win: it’ll be the white Republican guy. Why bother rousing yourself to vote for some Democrat who’s just going to get stomped anyway? Needless to say, this makes turnout comparisons even harder. What you really want to do is find other elections that feature close, well-funded races, and see how high black turnout is in them. Good luck with that.