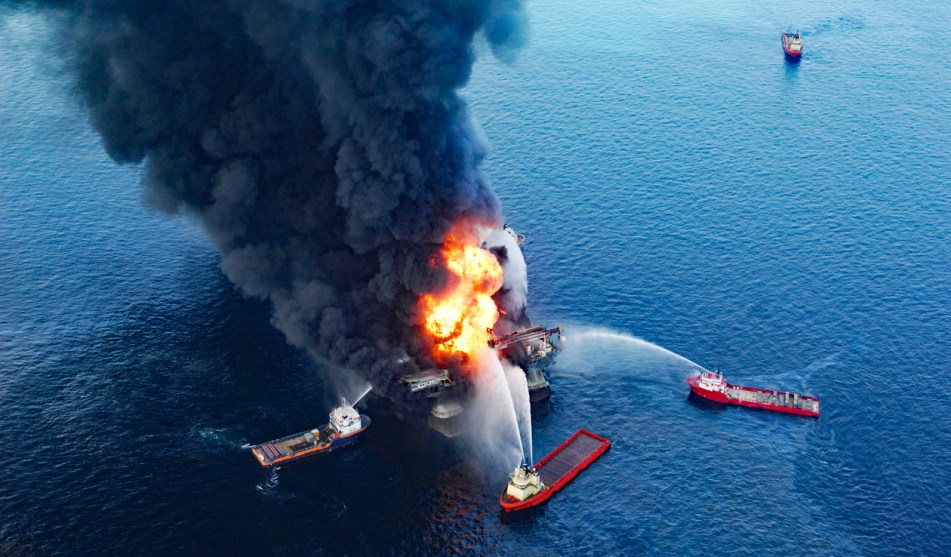 The Deepwater Horizon drilling rig in 2010 after an explosion that killed 11 and eventually released more than 200 million gallons of crude oil off the shore of Louisiana.John Mosier/ZUMApress

When I say that I’m relatively sanguine about the future of America, I’m talking in very broad terms. What I mean is that although Republicans are going to do lots of things that I think are damaging, I don’t think they’ll be able to drive a stake through the heart of American democracy.

In a narrower sense, however, I also think the damage they can do is more limited than they’d like (or that liberals are afraid of). Here’s an example. On Wednesday the Interior Department announced that it would open up nearly the entire outer continental shelf for oil and gas drilling. That’s bad. But actually getting oil platforms up and running takes more than just an announcement. Here on the West Coast, for example, the governors of California, Oregon, and Washington have all announced that they will do “whatever it takes” to stop it from happening:

There are myriad obstacles opponents can throw in front of the proposal, not to mention questions about whether the oil industry has much of an interest in California’s offshore reserves at a time when domestic oil production is at its highest level in decades.

….In California, the state coastal commission also has the authority to review activities in federal waters to ensure they are consistent with the state’s coastal management plans….While the U.S. Secretary of Commerce could override a commission finding that new oil drilling violated the state’s management plan, federal courts have tended to side with states in such contests.

And California has another weapon: State Lands Commission jurisdiction over tidelands and waters that extend roughly three miles offshore. That gives the commission the ability to stop the construction of pipelines that are the most economical way of transporting oil and gas from offshore rigs to land. “In some ways that is an even more formidable tool that the state of California and like-minded local governments can utilize to deny approval of things like oil terminals and pipelines crossing state sovereign tidelands,” said Richard Frank, director of the California Environmental Law & Policy Center at UC Davis.

Needless to say, the mere fact that building drilling platforms would touch off a legal war is something that will cause oil companies to think hard before they spend money on leases.

There’s no question that it’s genuinely bizarre to have a presidency that seems to be literally driven by a desire for revenge on Barack Obama because he made fun of Donald Trump at a dinner a few years ago. In one sense that makes Trump more dangerous than a normal president, but the very fact of Trump’s derangement has also spawned a far more energized opposition movement than a normal presidency might have. That’s why Trump doesn’t have his wall. Or his immigration restrictions. Or the repeal of Obamacare. Or the end of financial regulations. On one side, he has a Democratic Party implacably opposed to everything he does, and on the other he has a rejuvenated liberal movement determined to tie him up in court forever. This doesn’t mean Trump will do no damage. He’ll do plenty. But in the end, I suspect it will be less than we fear. There’s a real limit to how far even an unhinged political party and a monomaniacal president can buck public opinion.