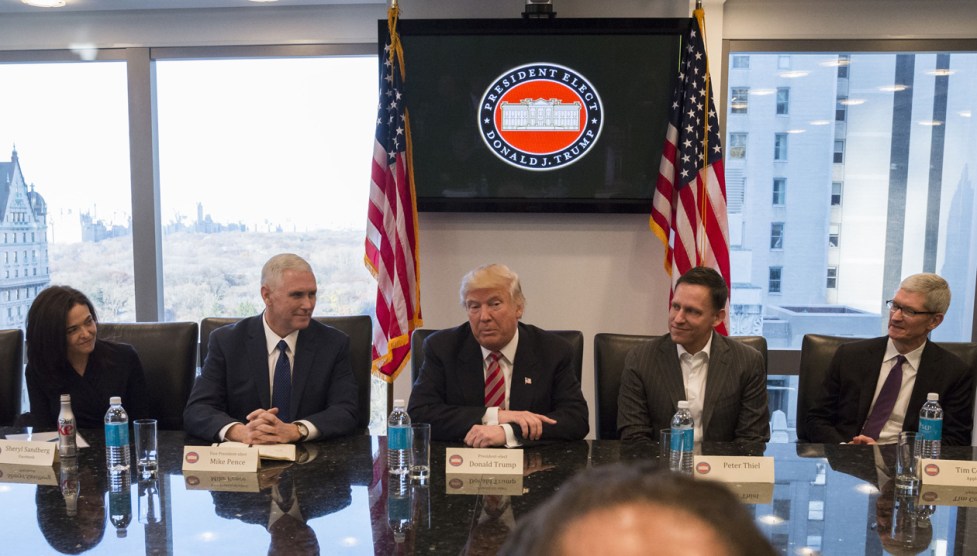 In fairness, Sheryl Sandberg's job requires her to sit next to Mike Pence, Donald Trump, and Peter Thiel and still smile like she's having a good time. So maybe she and her boss deserve all the riches they're getting from harvesting our personal information.Albin Lohr-Jones/CNP via ZUMA

Mike Masnick, in a piece subtitled “from the let’s-at-least-be-accurate dept,” says that Facebook doesn’t actually sell its user data. It sells ads that are targeted based on user data. Fair enough, and you can read his entire post to see why he thinks that distinction is important. However, before he gets there, he says this:

Before we dig into why they’re so different, let’s point out one thing that Facebook deserves to be yelled at over: it does not make this clear to users in any reasonable way. Now, perhaps that’s because it’s not easy to make this point, but, really, Facebook could at least do a better job of explaining how all of this works….Facebook, over the years, has done a piss poor job of explaining to users what data it actually keeps and what it does with that data. Despite some pretty horrendous practices on this front early on, the company has tried to improve greatly over the years. And, in some sense, it has succeeded — in that users have a lot more granular control and ability to dig into what Facebook is doing with their data. But, it does take a fair bit of digging and it’s not that easy to understand — or to understand the consequences of blocking some aspects of it.

I politely disagree. The pattern of Facebook’s conduct just doesn’t fit this narrative. In fact, Facebook doesn’t want to explain how all of this works. Facebook hasn’t tried to improve over the years. And their privacy settings are hard to understand because Facebook wants it that way. Consider:

Facebook’s behavior leads to only one sensible conclusion: they want to collect as much personal information as possible and they don’t really want to you to know about it. This is not illegal. Arguably, it’s not even wrong. Facebook’s whole business model is about providing users with a valuable free service and then using their personal information to pay for it. This is hardly a state secret, and to complain that they do it effectively is sort of naive. Supermarkets do something pretty similar with loyalty programs, and it costs a lot of money to opt out. Credit reporting agencies do the same thing, and you can’t opt out at all. Hell, at least Facebook gives privacy obsessives the possibility of opting out but still using the service for free.

So what am I griping about? Two things, I guess. The first is that Facebook is so damn churlish about just admitting what they do. The second is that people keep falling for the idea that Facebook is really, really trying to be better but repeatedly fails because…

Because why? Lousy management? Crappy programmers? A misunderstanding of what people want? A lack of control from the top? Come on. Facebook has none of these problems. They have top-notch management, brilliant engineers, a razor-keen understanding of what people want vs. what might piss them off, and a CEO with total control and an almost monomanical vision. Anything they do on the privacy front they do deliberately and methodically.

Facebook’s usual approach to these periodic storms of outrage is to apologize, make a few small changes, and then wait for the latest “delete Facebook” movement to settle down. If they lose 0.001 percent of their accounts in the meantime, they’ll make it up in the next ten minutes. And that’s exactly what they’re doing this time. Why else do you think it took them five full days to respond at all to the latest storm, before going public with a message so synchronized that you’d think Mark Zuckerberg and Sheryl Sandberg were zombie clones? It’s because they’re good managers, and they figured most people would move on to other, less boring things in five days. For the rest of us, they’re offering up a carefully constructed bit of pablum designed to maintain their usual charade.

And for those of us who are going to keep bitching no matter what? Well, haters gonna hate. Every company has haters, and they don’t really matter unless they have friends in high places. So far, none of Facebook’s haters do.