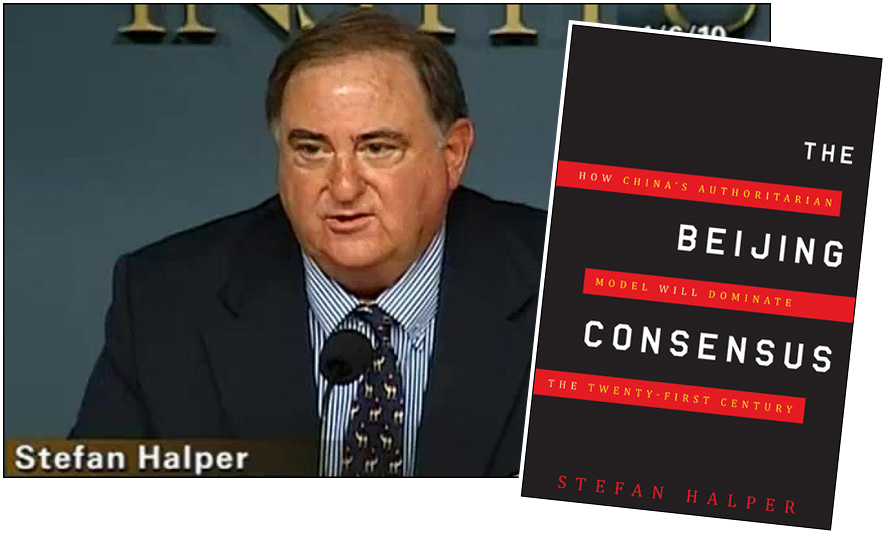 Top secret spy Stefan Halper in 2010 promoting his latest book on CSPAN. In the acknowledgements, he thanks Henry Kissinger and the former head of MI6—both of whom blurbed the book—and an all-star cast of other world-class military and intelligence officials.

Devin Nunes has been fighting with the FBI for some time in an effort to get them to reveal the name of the informant they used in 2016 to gather information about the Trump campaign’s ties to Russia. On Friday, the New York Times wrote this:

The informant, an American academic who teaches in Britain, made contact late that summer with one campaign adviser, George Papadopoulos, according to people familiar with the matter. He also met repeatedly in the ensuing months with the other aide, Carter Page, who was also under F.B.I. scrutiny for his ties to Russia….The informant is well known in Washington circles, having served in previous Republican administrations and as a source of information for the C.I.A. in past years, according to one person familiar with the source’s work.

This was enough information to identify the informant almost instantly, but the authors didn’t do that. “The New York Times has learned the source’s identity,” the article explained, “but typically does not name informants to preserve their safety.” A few minutes later, one of the authors of the Times piece tweeted this:

We don’t name the @FBI informant and say why but we have some great details. https://t.co/y1zWjHsge4

This is just bizarre. They obviously wanted his name to become public, but also wanted to pretend that they weren’t the ones who had done it. Why? In any case, not to keep you in suspense any longer, by several accounts the FBI’s informant was Stefan Halper, a guy who worked in the Nixon, Ford, and Reagan administrations and is now Director of American Studies at Cambridge University. He’s the son-in-law of a former CIA executive, and as a member of the Reagan campaign in 1980 he was instrumental in stealing classified documents from the Carter White House and handing them off to the Reagan team, which was paranoid about the possibility that Carter might announce an end to the Iran hostage crisis and thus gain in the polls. He’s such an obvious candidate to be the FBI’s informant that the connection was being publicly bandied about more than a week ago.

Glenn Greenwald has much, much, much more here,¹ and he is unsurprisingly skeptical about complaints that revealing Halper’s name endangered a longtime intelligence asset. After all, Halper’s connections to both the CIA and to high-ranking mucky-mucks in general is pretty well known. He’s not exactly operating under deep cover.

So it’s unclear what’s really going on here. Halper does not, in fact, appear to be someone in need of the highest levels of secrecy. The fact that he was pretty friendly with establishment intelligence services was well known. On the other hand, he also obviously wasn’t an FBI “spy,” as the Trump camp keeps claiming. He appears to have been just a well-connected guy who could chat with targets of FBI investigations without raising suspicions that they were targets of FBI investigations. I don’t see anything especially untoward about this, but neither do I really understand the scorched-earth campaign to prevent Congress from knowing what Halper told the FBI. It’s all very strange.

¹I guess that’s unfair. His piece is about 2,600 words, which is just a brief sketch by Greenwaldian standards.

POSTSCRIPT: I probably should have been clearer about this, but I understand that the FBI is opposed to naming any of its sources, regardless of how much or how little danger there is in outing one particular source. And this makes sense: aside from any specific damage, the FBI obviously needs its sources to know that they can trust them to keep their names secret. Outing any of them hurts their credibility.

And yet … still. Something seems a little off here. There was an awful lot of talk about lives being in danger, networks being blown up, etc. etc. Obviously I have no insight into what Halper might have been doing, and I support the general principle of keeping sources secret, but he sure doesn’t seem like an especially sensitive source. He was so publicly close to the CIA for so long that surely anyone who cares would already assume that anything said to him was pretty likely to end up in official US hands?