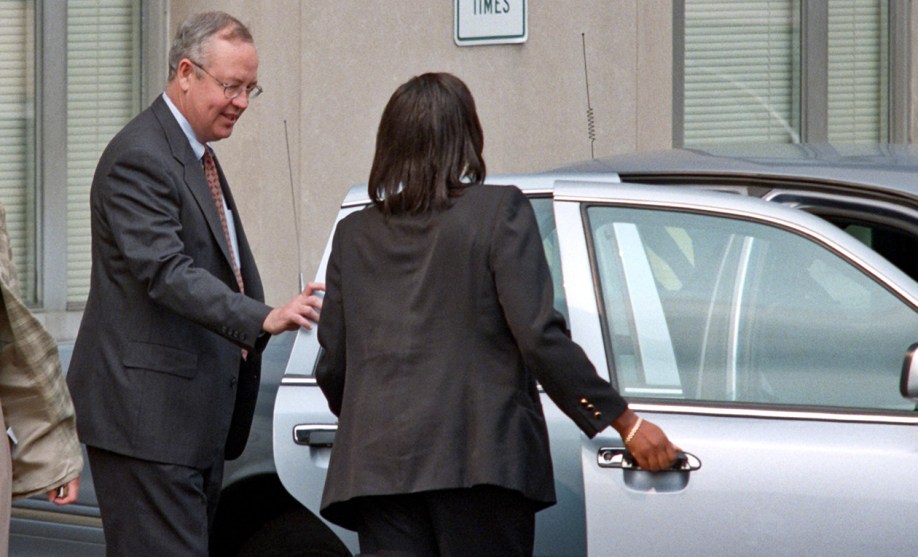 Federal prosecutors are generally barred from speaking with people who have already hired lawyers. This restriction, as the Washington Post notes today, “is to prevent ordinary people from being taken advantage of by prosecutors and their superior knowledge of the law.”

Back in 1998, Monica Lewinsky had a lawyer: Frank Carter, who was representing her in the Paula Jones case. Nevertheless, Ken Starr’s prosecutors ambushed her in the Pentagon food court anyway:

More than 100 pages long, the “Report of the Special Counsel Concerning Allegations of Professional Misconduct By the Office of Independent Counsel in Connection with the Encounter With Monica Lewinsky” provides a highly detailed account of Lewinsky’s first encounter with Starr’s lawyers, based on documents and interviews with those involved.

….When first approached at the food court and told that she was the subject of a criminal investigation, Lewinsky immediately told an FBI agent to “go f— yourself” and then told him to speak to her attorney, according to the report.

She agreed to go with the agents to a room at the adjoining Ritz-Carlton only after she was told that she would learn more about the situation without an attorney present. For hours, according to the report, Lewinsky tried “in various ways” to consult with, speak to or visit Frank Carter, a lawyer she had hired to assist her when she was deposed in the Paula Jones sexual-harassment case against Clinton. The report says Lewinsky spent those hours “crying, sobbing, regaining her composure, screaming.” One prosecutor told investigators that Lewinsky’s demeanor had an “unsettling effect on his own state of mind.”

Lewinsky was told repeatedly that she could speak with whomever she wished but was then warned that her cooperation would become less valuable if she consulted with anyone, including Carter, before agreeing to assist prosecutors, the report says.

This is old news, and the only reason to bring it up is that this is not Lewinsky’s version, or Linda Tripp’s version, or Bill Clinton’s version. It’s the special prosecutor’s own version. It was written by lawyers working for Robert Ray, who took over the case after Ken Starr quit.

I have a question for any practicing defense lawyers in the audience: does it ever hurt to refuse to talk to police or prosecutors until you have a lawyer present? Is it ever the case that you lose, say, a chance at immunity if you demand to have your lawyer present before you say anything? And is it considered prosecutorial misconduct to repeatedly try to talk someone out of speaking to their lawyer, even after they’ve said they want to?