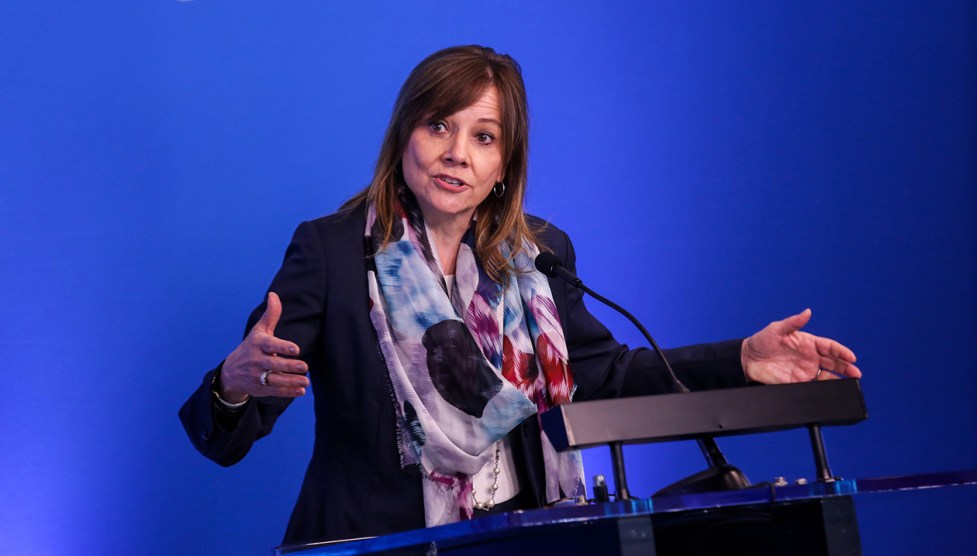 Come on, Mary, tell us what you really think of Donald Trump.Kimberly P. Mitchell/TNS via ZUMA

I mentioned a couple of days ago that Donald Trump’s strategy of attacking his enemies with every tool at his disposal has been working pretty well. Corporate America in particular sees no upside in ever disagreeing with him. Who needs the grief, after all? So they mostly stay quiet, and this helps Trump to spread the idea that no one outside a small band of radical obstructionist Democrats really disagrees with him.

But maybe that’s changing. Barely. Here is GM’s response to a request from the Commerce Department for comment on Trump’s proposed 25 percent tariff on foreign cars and car parts. After six paragraphs of throat clearing about the importance of national security and making cars in America, we get the following two paragraphs about the impact of tariffs on GM’s global supply chain:

If import tariffs on automobiles are not tailored to specifically advance the objectives of the economic and national security goals of the United States, increased import tariffs could lead to a smaller GM, a reduced presence at home and abroad for this iconic American company, and risk less—not more—U.S. jobs.

….Combined with the other trade actions currently being pursued by the U.S. Government—namely the 232 Steel and Aluminum tariffs and the Section 301 tariffs against Chinese imports—the threat of additional tariffs on automobile imports could be detrimental to our company. At some point, this tariff impact will be felt by customers. Based on historical experience, if cost is passed on to the consumer via higher vehicle prices, demand for new vehicles could be impacted. Moreover, it is likely that some of the vehicles that will be hardest hit by tariff-driven price increases—in the thousands of dollars—are often purchased by customers who can least afford to absorb a higher vehicle price point. The correlation between a decline in vehicle sales in the United States and the negative impact on our workforce here, which, in turn threatens jobs in the supply base and surrounding communities, cannot be ignored. Alternatively, if prices are not increased and we opt to bear the burden of tariffs or plant moves, this could still lead to less investment, fewer jobs, and lower wages for our employees. The carry-on effect of less investment and a smaller workforce could delay breakthrough technologies and threaten U.S. leadership in the next generation of automotive technology.

Now, it’s worth noting that GM said this in a regulatory comment, not on TV or in an interview with Fortune. It’s pretty low profile, and I wouldn’t even know about it if the New York Times hadn’t dug it up and highlighted it. It’s also worth noting that GM chose not to provide a comment to the Times except to say that they were “still assessing the impact” of the proposed tariffs. No need to poke the bear further! On the other hand, Harley-Davidson is already moving some production to its overseas plants, and the Times article points out that a Fiat Chrysler executive recently told Bloomberg that they’ve been doing “contingency planning on a massive scale” ever since Trump was elected.

This is still low-key stuff, but the threat of massive tariffs obviously has the entire auto industry scared to death. It has the potential to wreck their supply chains and spur retaliation, which would make them globally less competitive and lead to lower sales, lower profits, higher car prices, and worker layoffs.

Some context is also probably worthwhile here. With the exception of a few activist CEOs on both sides of the political spectrum—think Starbucks’ Howard Schultz on the left or Hobby Lobby’s David Green on the right—most modern CEOs don’t want to get in fights with presidents. They just want to be left alone to lobby for tax breaks and make a lot of money. In that respect, it’s not surprising that CEOs are reluctant to take on Trump, which means that Trump’s reputation for scorched-earth retaliation is only strengthening a tendency that already exists.

But now they have their tax cut, and going forward it doesn’t look like Trump is really going to be all that helpful to big business. He’s got his pet industries, like coal and steel, and certainly the EPA is taking a chainsaw to environmental regulations. But the former doesn’t help many companies and the latter probably produces headaches everywhere outside the power industry, since most big companies at least maintain a facade of supporting strong environmental laws.¹ So it might not be surprising if Trump starts getting a little more criticism from the business community. There’s safety in numbers, after all.

¹Because among the ordinary consuming public, environmental regulation are very popular and no company wants to be viewed as insufficiently dedicated to cause of a cleaner planet.