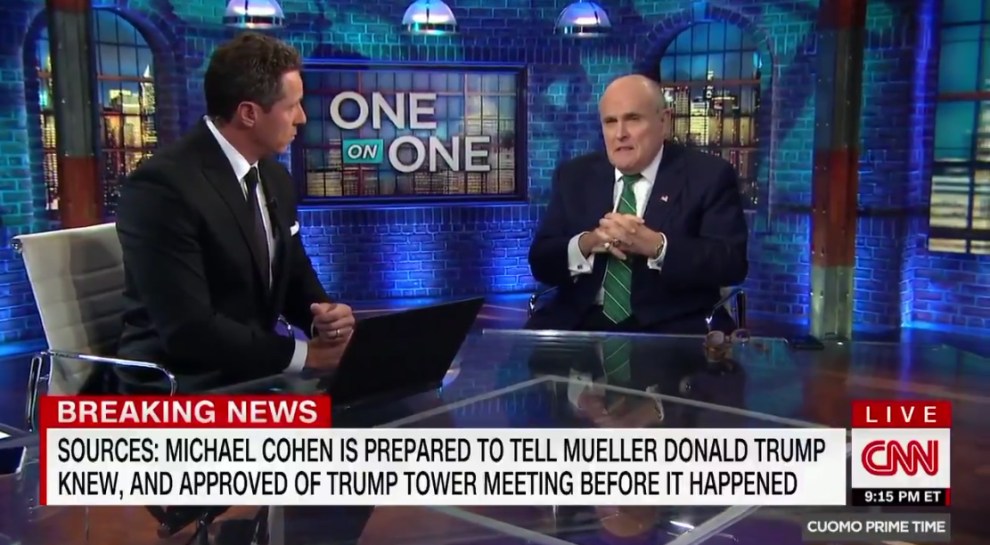 I’m a little behind on this, but here’s the latest on the Michael Cohen front:

Michael Cohen, President Donald Trump’s former personal attorney, claims that then-candidate Trump knew in advance about the June 2016 meeting in Trump Tower in which Russians were expected to offer his campaign dirt on Hillary Clinton, sources with knowledge tell CNN. Cohen is willing to make that assertion to special counsel Robert Mueller, the sources said.

“I don’t see how he’s got any credibility,” Giuliani added. Giuliani also said Cohen is “the kind of witness that can really destroy your whole case” and called Cohen, who was a top Trump Organization attorney for a decade, a “pathological liar.”

So Rudy says that Trump’s longtime attorney and fixer is a “pathological liar.” But why did Trump need a pathological liar on his staff? Should we assume that everything Cohen has said for the past few years while he was defending Trump is a lie? Should we assume that Trump’s need for pathologically lying attorneys continues to this day, which is why Rudy is on TV every day retailing the most ridiculous lies imaginable?

In any case, it looks like the Trump-Cohen relationship is now in full meltdown: apparently there’s not just one recording, there’s a dozen—or maybe a hundred. Plus there’s this:

Allen Weisselberg, a longtime financial gatekeeper for President Donald Trump, has been subpoenaed to testify before a federal grand jury in the criminal probe of Mr. Trump’s former personal lawyer, Michael Cohen, according to people familiar with the investigation.

….In the recording, which Mr. Cohen secretly made and which is under review by federal investigators, Mr. Cohen said he would set up a company to make the payment, adding, “I’ve spoken with Allen Weisselberg about how to set the whole thing up,” before Mr. Trump interrupts him. Later in the conversation, Mr. Cohen reiterates that he “spoke with Allen” about the plan to finance the payment.

I’m sure I’m not the only person who’s reminded by this of the years-long drip-drip-drip of Watergate revelations. I was only barely old enough back then to really follow along, so it looks like now I get a second chance in full adulthood. But I’m not sure that helps: so much shit is going down that I still have a hard time keeping up. What’s going to happen next week?