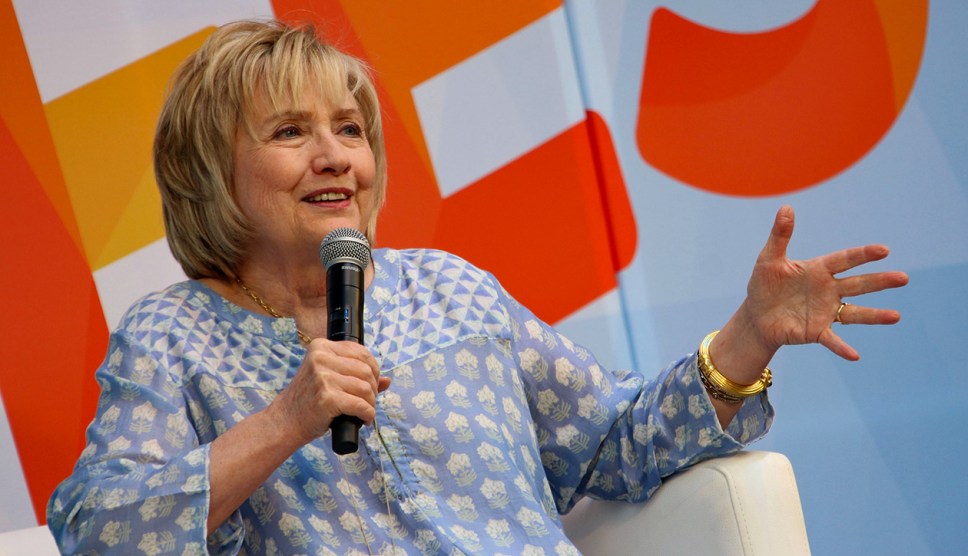 I hate to pick on Michelle Cottle, who I like, but columns like these about Hillary Clinton just piss me off:

In these furious, final days before the midterms, Democratic candidates need to be laser focused on their message to voters. They need to be talking health care and jobs and other issues of intense, personal concern to their electorate….And yet, there was Mrs. Clinton, in an Oct. 9 interview with CNN, sharing her take on the need for Democrats to — as Michelle Obama might have put it — go low with today’s Republicans. As Mrs. Clinton sees it, “You cannot be civil with a political party that wants to destroy what you stand for, what you care about.”

She is hardly alone in this assessment….It is, however, extremely likely to electrify the Republican base, in whose collective lizard brain Mrs. Clinton still looms large — the ultimate boogeyman to be invoked whenever a Republican politician is having trouble exciting his constituents, or when a Supreme Court hopeful needs to shore up his endangered nomination. For a G.O.P. desperate to get its voters to the polls on Nov. 6, what could be more welcome than “Crooked Hillary” jumping in to inflame partisan passions?

For chrissake. If there’s a human being on the entire planet who’s earned the right to spout off about the need to crush the Republican leadership into Soylent Green and then distribute it in sacks to the poor, Hillary Clinton is it. After three decades of calmly putting up with an Augean stable’s worth of lies and attacks and assorted other forms of vicious bullshit, if she says it’s time to fight back, maybe we should listen.

Beyond that, her remarks barely merited any coverage anyway, so she was hardly hurting anything. And that’s too bad, because I’d say Hillary has learned a thing or two. This is not your grandfather’s Republican Party anymore. Not for a long time. This is the Republican Party of Newt Gingrich and Donald Trump and Mitch McConnell and Paul Ryan and Sean Hannity and Tucker Carlson. They care about nothing except kowtowing to the rich. They lie constantly about everything. They launch vile personal attacks a dozen times a day. They gerrymander and pass ID laws and refuse to let students vote and do anything else they can think of to make it harder for Democrats to cast ballots. They do all this without a smidgen of guilt and their base loves it.

But for some reason, a simple acknowledgement that Democrats could stand to be a little less civil about this produces the heebie jeebies: “There are also plenty of Americans, including many of the independents and swing voters the Democrats are working so hard to woo in this cycle, who feel queasy about the depths to which public discourse has sunk and are not eager for an arms race of unpleasantness. Having Mrs. Clinton proclaim political civility dead until her team wins again is unlikely to prove an inspirational message for these voters.”

Yeah. Maybe so. Then again, all of these independents and swing voters don’t seem to feel all that queasy about the Niagara Falls of malice and degeneracy produced on a daily basis by Republican candidates and cable talkers. Maybe, just maybe, they can handle the bare truth about all this from Democrats.

As I said the other day, this isn’t carte blanche to be an idiot. Every district is different. But on a national basis, Democrats need to add to their repertoire. Sure, they should talk about “health care and jobs and other issues of intense, personal concern to their electorate,” but they should also declare war on the Republican Party and its constant lies, its all but overt racism and xenophobia, and its endlessly debased behavior.

Or, more to the point, Democrats should simply fight the war that’s already been declared against them. How many black eyes do they need to get before they figure out that electrifying their own base is a far bigger concern than worrying about a Republican lizard brain that long ago fossilized into an organ of pure hate and venom? If Tucker Carlson decides to turn it up to 11, who cares? What matters is that maybe Democrats should turn it up to 10.

POSTSCRIPT: As for the business of Hillary defending Bill, here’s my advice: just ignore it. I mean, Al Capone’s mother probably thought he was a good boy. What do you expect from relatives? This crap has been litigated in public for two decades now. It’s time to declare it over and spend our time on more pressing matters.